Colleen Hardison is a Chicago-based freelance illustrator. She graduated from Massachusetts College of Art and Design with a BFA in Illustration and moved to Chicago in the summer of 2015. Her illustrations and drawings are raw, dark and vivid, often making a subtle reference to current social and political issues. Her process is very iterative and often builds off of old sketches or evolves from a collage of her previous ideas. She works primarily out of her sketchbook, rendering drawings with ink pens and then developing them through illustrator, before deciding to print them out. She is currently learning how to incorporate screenprinting and risograph printing into her practice.

Manisha: How would you describe your work and what medium do you primarily work in?

Colleen: So I would describe my work as naïve and graphic. I like to use gouache, which is unfortunate because it’s really expensive. I also enjoy flat and inky things. When I first started school, I was focused on executing my renderings in a realistic style and worked primarily with oil paint. But then one of my professors at the time told me: “Great job, but this is boring. Your sketches are finals.” And that stayed with me because I like to work pretty fast and loose using a lot of colors.

Manisha: That’s something that caught my eye about your work. While it may be loose and painterly, it can be interpreted both as a work in progress or something that is finished.

Colleen: Yeah, because if I mess things up from the start, I don’t feel married to it so I can keep pushing the idea until I like it or just throw it out. Mostly I just throw it out. So I have a graveyard of scraps from previous sketches. I also like to work on five different things at once. What usually happens with most of my projects is that I draw something, thinking to myself “well, this looks good enough,” and then end up re-doing it until I’m happy with it. Or sometimes I scan my work and play with it in Photoshop. I like ink and Photoshop a lot. So I would say I work with a combination of the two. However, something that I do try to keep intact in all of my work is the initial sketchy feeling.

Manisha: Have you worked with any other forms of printmaking?

Colleen: When I was in school I tried etching and monotypes. I did a little bit of offset, which I really enjoyed. But because of the way my school was set up, you couldn’t be a print major and an illustration major. So I stopped printing at that time. Later when I found Spudnik I decided to become a member and take up printmaking again.

Manisha: Does your work deal with specific themes or subjects?

Colleen: I like the idea of combining two disparate things together as much as I can. I am also drawn to things that are goofy and childlike, but at the same time weird and a little off-kilter. For instance, I am a fan of outsider art and I like how things are unexpected, and sometimes brash.

Manisha: What kinds of things are you reading or looking at that are influencing your work right now?

Colleen: Right now I am looking at old tattoo flash art from the 40s. I keep a close eye on anything that strikes me as an odd quality in the sketches. In some ways, the tattoo flash art reminds me of American Folk Art and how artists then would create paintings and figuring things out as they went along. It’s all about the little imperfections for me. And on the opposite end of that, I am also studying Japanese woodcuts because they are so precise and mechanical. I am also looking at the way they separate colors and compose an image.

Manisha: Is there a project you are working on right now?

Colleen: I brought home a DIY silkscreen kit because I am trying to re-learn how to use screen filler and create a reductive print. Most of it is off-registration so of the twenty prints I made; I am happy with maybe just two of them. I’ve also been spending a lot of time adding new and interesting things to my portfolio. I’m at a stage where I am just forcing myself to draw and keep going. But I made something goofy this morning. My friend showed me this Facebook group called “Show Me Your Aspic”; aspic is similar to jello and the old term for gelatin. But it’s also a play on the more vulgar reference it’s making. So I made some art for that. It’s really kitschy and funny and I am obsessed with that stuff. 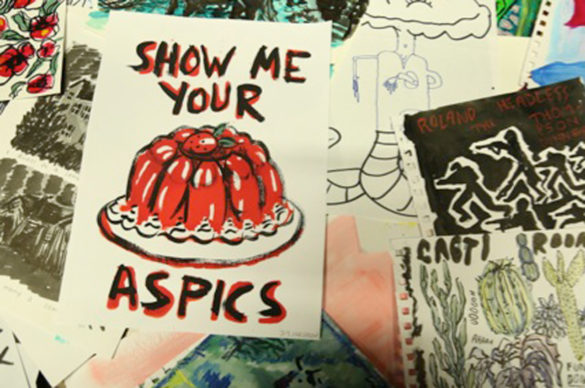 Colleen Hardison, a sketch for ‘Show Me Your Aspics,’ February 2018.

Manisha: There were two illustrations on your website that stood out to me because of the social message in them. One was called Serving Size and the other was called Bad Dog. Are those things that bother you or that you are consciously making work about?

Colleen: I’d say both. The Bad Dog piece was part of a larger series of work I did about child abuse. For this series, I was inspired by my interest in editorial illustration. I was focused on making something tangible out of a big idea. The Serving Size piece was for Tufts Magazine and it was about how portion sizes at Italian restaurants are inherently big. Those are just two takes on social issues that I try to represent in my style. But I do want to be an editorial illustrator someday so I constantly take up social issues and try to create images in response to them. 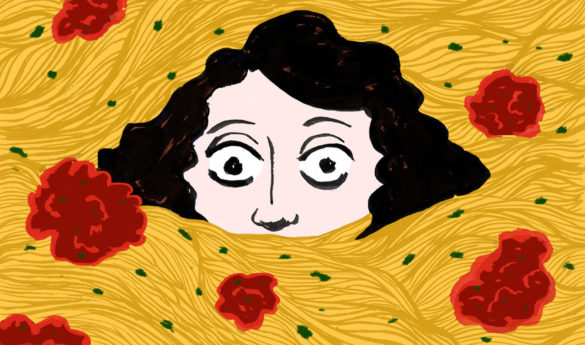 Manisha: Do you have a pre-studio ritual?

Colleen: I linger. I linger a lot. I talk myself into it. Usually my pre-work routine is to watch a video of another artist doing something and then I’ll tell myself: “That’s what you could be doing if you weren’t sitting in your pajamas!” I have to psyche myself into it. I have this thing where my brain doesn’t turn on until nearly 10:00 p.m. at night. Sometimes I’ll draw something I enjoy, but most of the time I scrap it and then try again and it goes on. And that’s my process. It’s kind of insane. 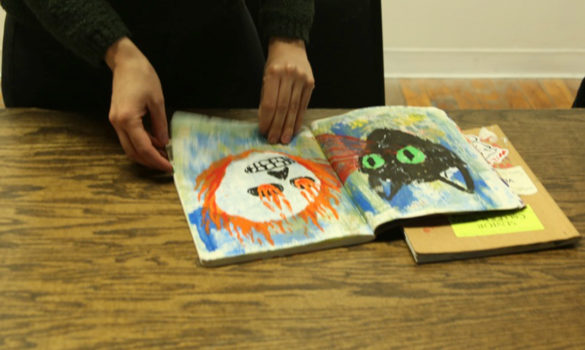 A peek into Hardison’s sketchbooks from college.

Colleen: It is annoying because sometimes I would have spent all day trying to come up with something and not accomplish anything. My process has never been easy.

Manisha: Did moving to Chicago influence your practice in any way?

Colleen: I like the artist community of Chicago and I want to be part of it. But occasionally, social anxieties get in the way. There are so many artists here and it’s overwhelming at times. It’s like being a freshman again and having to make new friends. But then this year I found spaces like Spudnik, and I pushed myself to try new things. 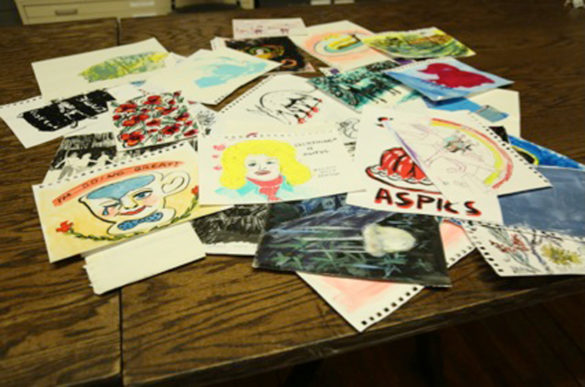 A selection of Hardison’s sketches.

Manisha: Where can people go to see you work?

Colleen: In April I am going to have my work up at Atomix Café in Chicago.

Manisha: And one last question. I know you love everything pastry. What would you say is your favorite kind of pastry stuffing?

Colleen: Ooh, oh there are so many. I love a buttery flaky outside and a really tart middle, maybe blackberry or raspberry. Something I didn’t experience until recently was Matcha. I think I got it in Chinatown and it was delicious!