Emma Bilyeu is a visual artist working out of her basement studio in Humboldt Park, Chicago. As a student of printmaking and book arts she likes to incorporate paper, letter shapes, book forms, and multiples into her work. With this she is able to explore ideas of communication and storytelling. When not in the studio, Emma is cuddling her dog, reading dystopian or self-help literature, or attending a Chicago Printers Guild meeting.

[Ruby LaPorta]: What has your experience been like as a Spudnik Studio Fellow?

[Emma Bilyeu]: I’ve found that it’s nice to be held accountable. Before the fellowship, I had a membership here, but only made one or two prints. The fellowship has provided the kind of community and structure that encourages me to produce more. Even though working at Spudnik comes with a built-in community, my introverted nature felt more comfortable in the structure of the fellowship, which is a very personalized way of being involved with Spudnik. Being a fellow gives me a feeling of ownership of the shop, which in turn has improved my workflow within it.

[RL]: I read your project statement regarding what you wanted to accomplish through your fellowship. Do you think you fully realized what you set out to do?

[EB]: Well, it’s not over yet! Because I have made a lot of singular artist books, I thought it would be a good idea to use the fellowship to make a large edition. However, the idea of creating so many books was keeping me from just exploring my concept. I was paralyzed by the logistics so instead, I’ve altered my plan.  I am on the path of making a book that combines both etchings and screenprints. I’m creating a single book (instead of an edition), and exploring the same concept through prints, too. 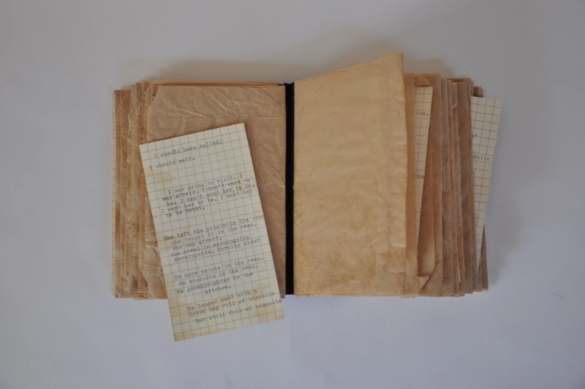 [RL]: What drew you to Chicago?

[EB]: So, I’m from Indiana originally. I went all around for school—I ended up in Georgia. Then I had an internship in upstate New York. After that, I thought the natural next step would be to move to New York City, but the few times I had visited I felt very alienated. At that time I knew a few people in Chicago, not necessarily in the art community, but people I could reach out to if needed. And Chicago is close to my family, which is a plus. I have really enjoyed Chicago. It’s hard to compare to other places because every other city I’ve lived in has been experienced while being in school.

[RL]: How has Chicago helped you evolve (as a person/artist)? What’s it like being a part of the Chicago printmaking community?

[EB]: It was a learning curve at first, like learning how to make friends when you’re not forced into the same environment. When I moved here, I was too shy to come to Spudnik, so I was just doing a lot of drawing and painting. However, once I mustered up the courage, I realized the people at Spudnik are just like all the other printmakers I know—super rad, friendly, and encouraging. Nothing to be afraid of! Being at Spudnik has been great, especially having the other fellows to commiserate with and to encourage each other. It’s like a little family. We all get along really well. Spudnik definitely shapes my view of Chicago in a positive way. 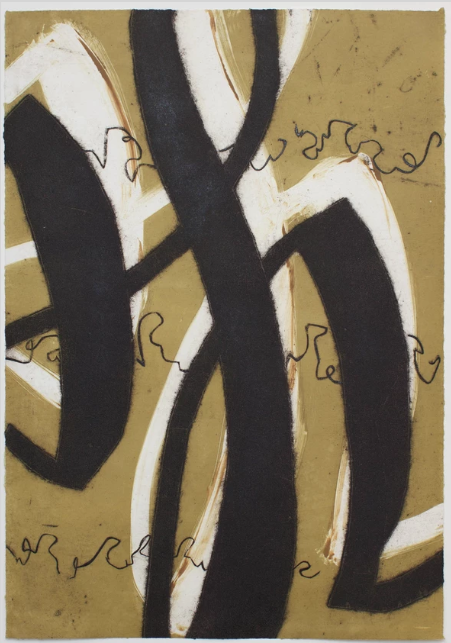 [RL]: Through your website, project statement, and artist statement, I noticed you play a lot with the idea of communication and not only the forms it can take—being illegible, repetitive, or layered—but the way this language is transmitted through “book-like” objects, as you put it. Can you speak more to this thought process?

[EB]: For a while I worked strictly with ambiguous letter forms, I didn’t know what kind of statement I wanted to make in my work. The letter-ish shapes seemed comfortable and at the same time ambiguous enough to be able to hide behind them. Yet, I know these forms take on more meaning as I keep working with them. Lately, I am building layers in my work to represent the mind’s thoughts and the complexity of them. Not knowing what to think, possibly avoiding thinking, and representing that kind of mindspace visually. So, book-form feels natural, almost journalistic, private, yet public, but somewhat illegible. 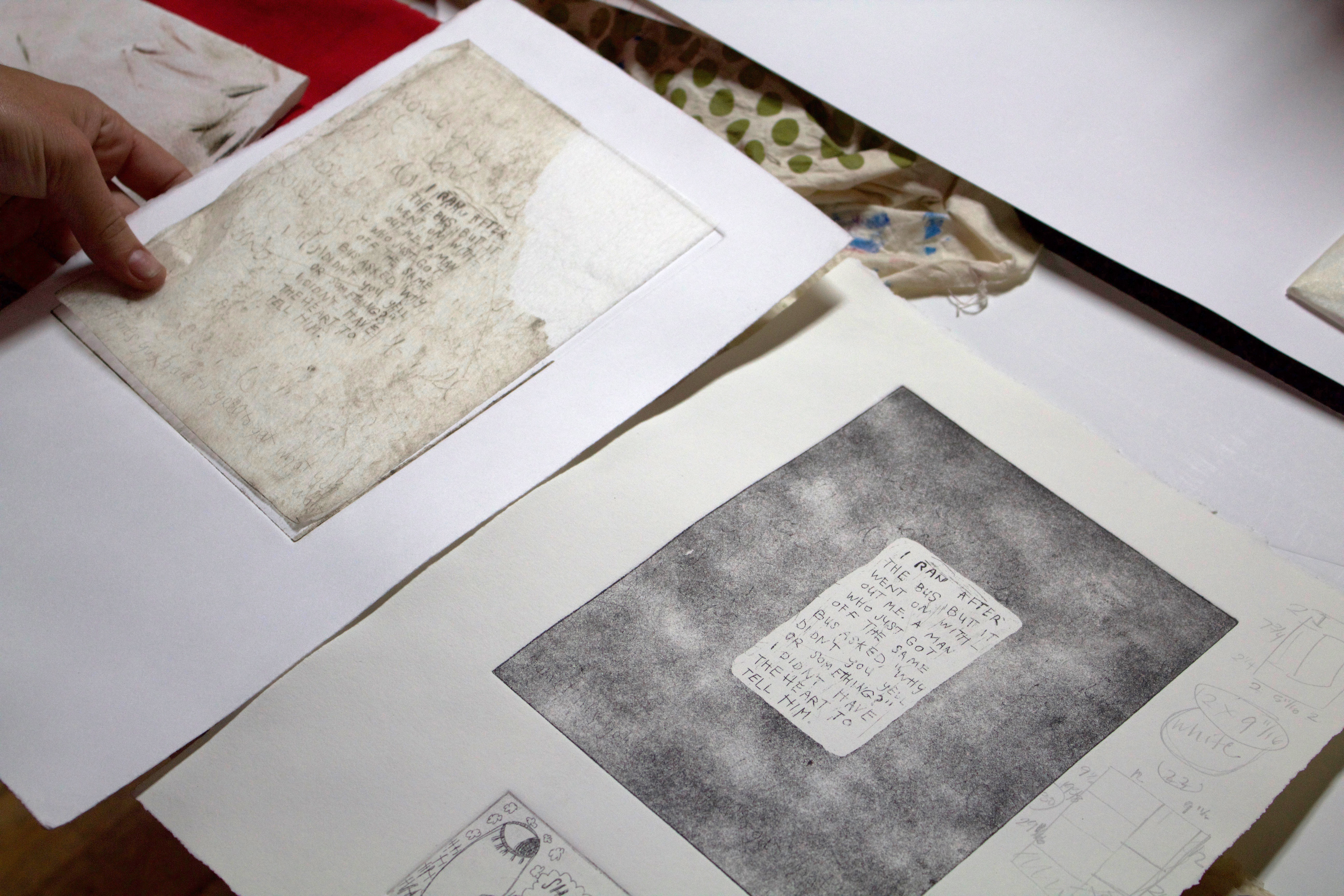 Works in progress by Emma Bilyeu.

[RL]: Your current project is titled “Vermilion”—what is the significance of the color vermilion in your work?

[EB]: I am simply drawn to the color. I find myself mixing that color, buying ink pens in that color. I am just attracted to it. I was googling around to research vermilion, because the origin of pigments are interesting to me. As it turns out, vermilion comes from the word “vermin” because there was a worm that they crushed and made into this pigment.

[EB]: It is fascinating! And beyond that, I am trying to make this connection in my book between simple thoughts and how they inhabit my brain where I wish more complex thoughts would naturally develop. So the simple phrases like the pest or vermin will be foiled with a more subtle, but still legible, dialogue representing more complex thinking. 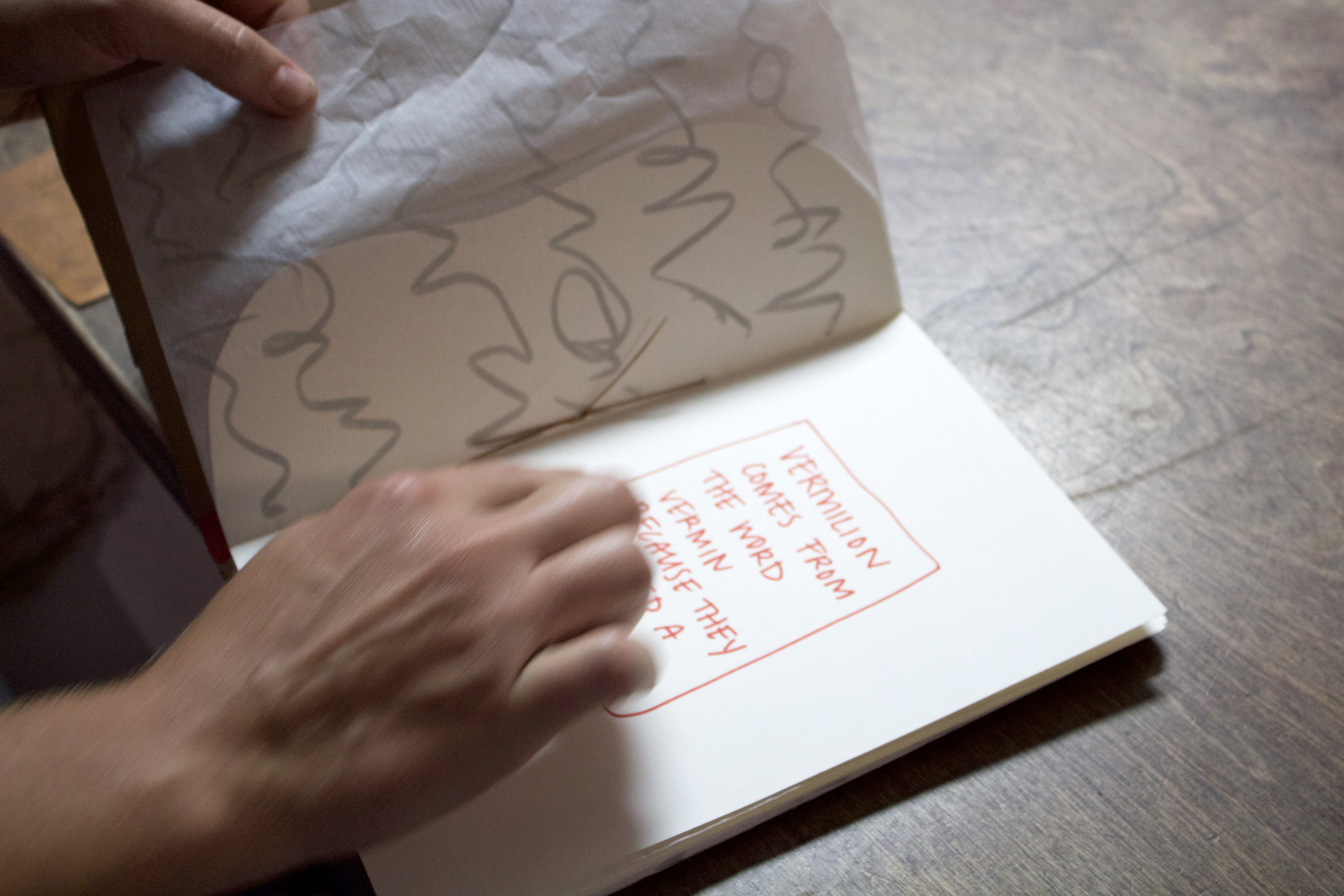 [RL]: Is there a favorite printmaking or book-making process you have?

[EB]: When it comes to printmaking, I really like etching. It has a really gritty, physical element to it. It feels like a mini sculpture or something. I’m really drawn to the technicality of it, too. I go back and forth between deciding if I’m an artist or just a craftsperson. I feel like I am pretty skilled at printing on copper, and that’s satisfying to me. And for bookbinding, I think it varies. If I’m making a sketchbook I like to use coptic stitch because I like the look of the exposed binding. But it ends up that a lot of my finished artist books are bound as accordions or some variation of it. 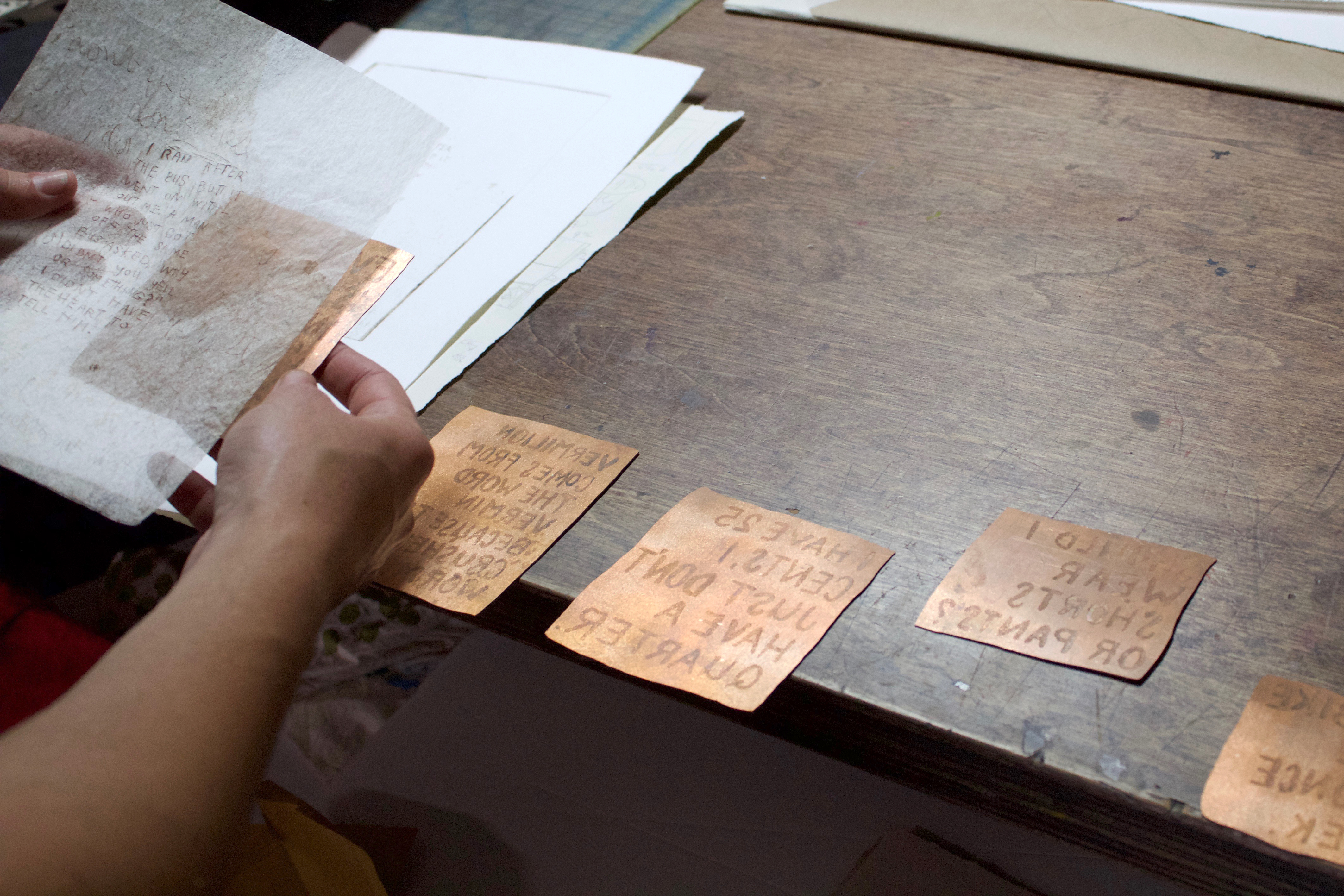 [RL]: Do you think that it’s important for the book form to reflect the text that you put inside?

[EB]: Yeah, I mean every decision is conscious. I try to put some thought into how the structure informs the content and vice versa. But sometimes it does just feel like bulls**t, trying to make all of these connections when it could just be straightforward, simple.

[EB]: Yeah that’s true. It adds another layer for people to get lost in though, which I don’t mind! The longer they spend thinking on it is fine with me.

[RL]: Since language is such a large aspect of your work, what are some literary pieces/ writers that influence what you make?

[EB]: I’ve been really into short stories lately. I like how they are just a window of a larger story. It leaves a lot to the imagination. So you pick up in the middle, and soon it ends, and it could be a satisfying ending or you could just be left on a cliff. Recently, my favorite collection of short stories is The Withdrawal Method by Pasha Malla. I’m really impressed by his ability to write from so many perspectives. If I remember correctly, in The Withdrawal Method there are perspectives from a child, an animal, men, women. That is really inspiring to me- that he can be so brief, but yet it so complex and it works. Also, I recently read the funniest, strangest story. It’s called Tacky Goblin by a local author, T. Sean Steele. I was reading it when I had to commute on the train to a job, and it had me laughing out loud. The story is so bizarre and I think the lightness and the strangeness of that book is a good reminder that not everything I put out has to be so serious.

[RL]: Absolutely. There’s also, along with pressure to create meaningful content, a pressure to constantly be creating “really good work”. 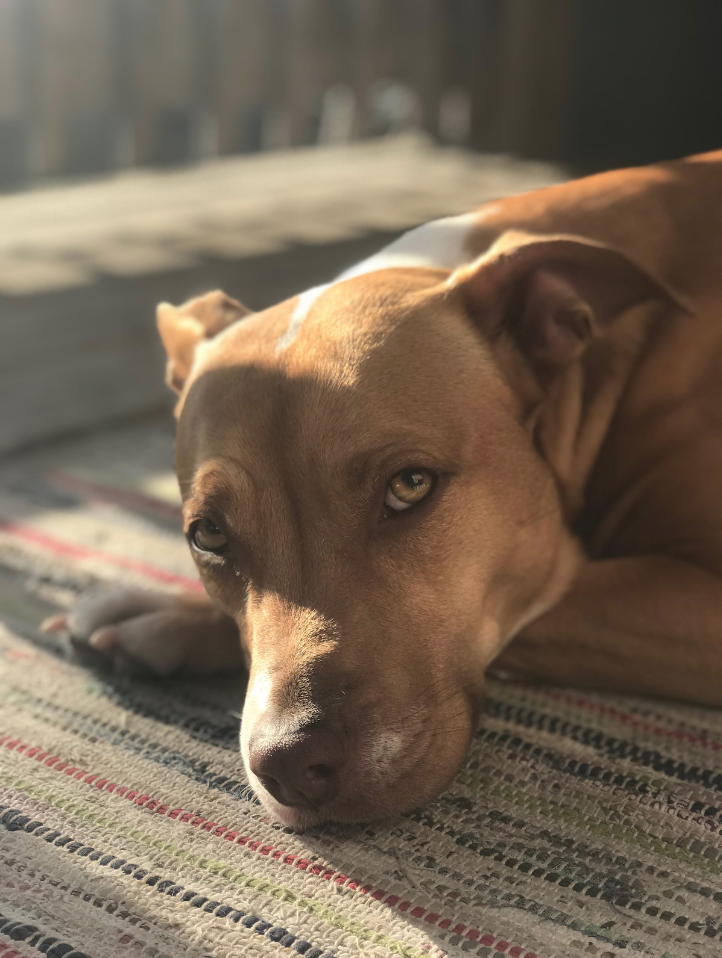 [EB]: Yeah! I’ve been using Instagram stories a lot, and people tell me I’m funny. They’re just feeding my inner comedian ego. I’m trying to figure out how I can get some of that reaction in the visual work that I’m making. That’s just a thought, I haven’t explored it much. Well, I guess maybe a little. I have one etching that says “Sadie, you ate my first skateboarding scab” (Sadie is my dog). I fell, and I got a big scab on my arm and I peeled it off like any human does, and for some reason I had it sitting on my laptop and I closed it and forgot to take the (this sounds so gross) scab out of my laptop. I took my computer to my hometown and was with my parents that weekend. As I was sitting on the floor and I opened up my laptop to do some work, Sadie just waltzed over and “slurp!” ate it. I was like, “Wait I kind of wanted to keep that.” Because it was a marker of me learning [to skateboard]… but I guess not. So I have kept the memory in an etching.

[RL]: Like you said, you find Instagram stories as your “comedy” outlet.  you see yourself exploring how your practice can evolve alongside social media more?

[EB]: I think so. Because I think when I have the gut feeling that I should open Instagram and share something with the world, it would be smart to share it in a more permanent way. I don’t think I would catalogue my stories as finished work. I don’t know if that’s a thing, if people do that. But, I guess it’s more of like a sketchbook in a way.

[RL]: What’s next for you after your Spudnik fellowship?

[EB]: Well, November is busy. I am tabling at the Chicago Printers Guild Publishers Fair and the Spudnik Fellows have an exhibition opening, Bulletin, at Fulton Street Collective that same week. I am kind of in between jobs. I have thought about returning to school, since I want to keep learning somehow. Whether that’s through a university, or getting more serious about bookbinding and starting to master that craft. I really enjoy doing publishing. I was able to work on a piece with Angee, Spudnik’s founder and director, and I did a bit of that in undergrad with visiting artists—the technical side of making art. I’m not positive, but I would like to pursue being a tech person for artists and anyone who want to make books. I am still navigating how that will come about.

[RL]: It’s definitely nice to be at a place like this where that is so accessible and it’s so easy to learn and observe. There are so many people coming in and out, it’s great to be in an environment that allows that to develop.

[EB]: It is exciting to see people get excited about printmaking, or learn new ways to make.

[RL]: Well, my last question was if you have any pets, but…

[EB]: Haha yes, I have Sadie! My boyfriend got her when she was a puppy and I met her just after she turned 2. She is the sweetest; an angel.