Atlan Arceo-Witzl is a Mexican-American visual artist and creator whose work is concerned with everyday rituals, icons, symbols, objects, and language. He is a recent graduate of Skidmore College with a BS in Studio Art, concentrating in relief printmaking, sculpture and drawing. He lives outside of Chicago in Oak Park, IL pursuing a career in the arts and enjoying the fascinating human game of communication. He is currently a Studio Fellow at Spudnik Press.

Cat Chen: How did you get into printmaking?

AAW: So my dad went to The School of the Art Institute in the 80’s, and he studied printmaking there. I grew up with printmaking in the house. Our basement had printing press and all the ink, so I was kind of raised with it. In middle school I was exposed to things like linoleum, and then from there I knew I wanted to pursue art in higher education. I started with an intro class, and really kind of dove into it. I got to experiment with lithography, relief, woodcut, and intaglio, just like a good mix of different processes. After a while of trying a bunch of different mediums I think woodcut was the one that stuck the most.

CC: What is it about woodcut that interests you?

AAW: That’s a good question. What I’ve been exploring for the past year and some change has been the quality of the wood block as a storied object. I enjoy how tactile the surface of the woodblock is because things like intaglio are pretty subtle. Screenprint too is something that you can see what’s happening but you can’t touch it and say, “Oh I see this is where something’s going to pick up and print and this is where we’re not touching paper and so nothing’s gonna happen.” There’s a lot of character you can put into a woodblock. Also nothing looks like a woodblock cut! You work with the natural qualities of the material and turn them into whatever you want to get out of it.

CC: I read in your artist statement that your work has to do with “everyday rituals.” Can you talk about what that means?

AAW: When I was working on thesis, I discovered that I enjoy things that are mundane and part of everyday life. There’s a piece I did in my lithography class that was a mug that was kind of being morphed upside down into a reflection of itself. 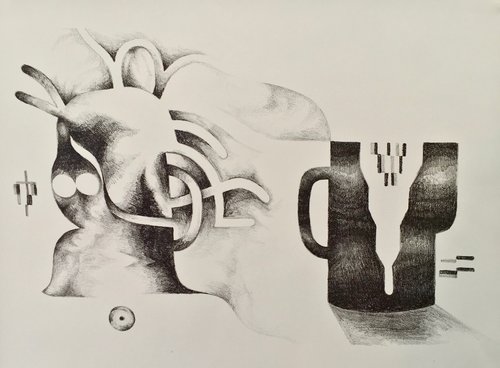 And it elicited the most response of any piece I had done in that class and I was like, “What about it is doing that?” When I started to talk to people about it I found that the piece is grounded in the everyday, but elevating it to a level that you can appreciate. It’s also a little bit comical!

This print is about readymade monuments for things that you use everyday.

It depicts a clothes pin, a mug, a comb, and a telephone—but not like an iPhone—like an old house phone kind of deal-io. The tactile nature of doing everyday tasks and having a structure to your day often revolves around objects that you use. I carry a comb with me everyday. I think it kind of grounds me. I’m prone to mechanical distraction so having something to do with my hands is very much a thing that I enjoy. That ties back into this idea I really enjoy that’s, “You’re ancient now, the things you do are ancient now.” When you go back to the records of what people did everyday—they used this kettle to cook their meals and they did it in this pot, or they went up these stairs and put that incense there on this altar—in a way that was very normal.

CC: I know a lot of your work comes from the visual language of Mesoamerican and Indigenous cultures. You also mentioned the United States Post Office as one of the traditions you draw from. What are your personal connections to these traditions?

AAW: The Mesoamerican part of it comes from the house that I grew up living in. My dad is from Mexico, and he and my mom did a lot of traveling around Mexico. My dad worked for what’s now called the National Museum of Mexican Art in Pilsen. So I know my background is half-Mexican and half German-English on my mom’s side. Besides that, I think the visual language of Indigenous peoples is very evocative and is also reflecting things that are happening in the everyday. Using the Postal Service became a funny thing about analog communication in our information era. I think the postal iconography too was something that really struck me.

CC: What do you mean by that?

AAW: The postal service is a keystone for communication, but is also an organization. I think organizing is a thing that we like to do as humans. “We have this mission and we’re trying to do this,” and then making an image or approach that matches the mission of that group. It’s a really…diverse but quirky practice in a way that sometimes works and sometimes doesn’t. I think accessibility is an interesting thing for the postal service too, because it allows anyone to send a message to wherever. Nowadays you can do that on your phone, but it’s a relaxing practice to take stock of what you’re trying to say to someone in a tactile form and it shows that you care a little bit more.

CC: Do you mail things still?

AAW: Yeah, so I started this project a little bit before Spudnik. I heard this phrase at the print studio one day, “What About Yesterday’s Lunch?” I have these moments sometimes where I hear a phrase and I liked the way they sound so I wanna record them. The project became a kind of funny thing but also meant to be a check-in question with friends after school. I did a little booklet to start off with, and I did a little prompt for people to make their own post cards that will be compiled into a booklet. I’m still waiting to see if I get any more responses.

CC: You talked a bit about the text you got from just overhearing things…is that usually how you get an idea for what to put in a work?

AAW: [The artist] Lesley Dill came to visit at Skidmore, and she was talking about how much she records passing ideas. If it’s something you think will be valuable later, you have to write it down in the moment. Because if it’s not important we’re not gonna remember it, and it’s hard to tell what’s important without giving it a chance. I think the way that I process information sometimes comes in these little instances or little phrases of words that get grouped together somewhere. The first print that I did at Spudnik included the phrase, “Out of the blue, on the wings of small events.” I love the idea, because that’s how we live our everyday lives. Things aren’t just magically happening. The phrase itself comes from a Union Pacific Railroads safety video that was meant to prevent injury for railroad workers. It just popped up in the middle of a video I was watching. That’s another silly thing I like to do: just browse through the internet for instructional videos and what used to be considered documentaries. 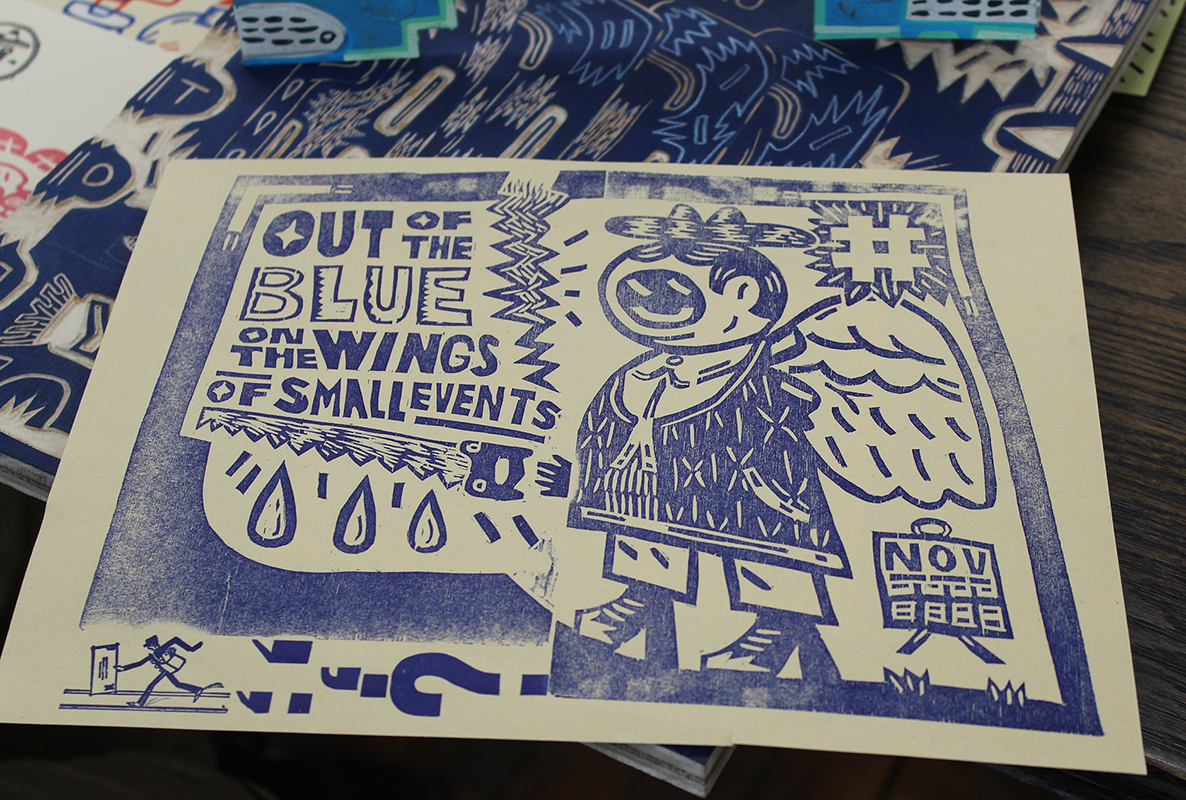 Out of the Blue, On the Wings of Small Events, letterpress printed woodcut, 2019

CC: Is your process usually hearing the words first and then the image comes after?

AAW: Sometimes they’re kind of co-evolving, and sometimes an image gets punched in my brain. I have a lot of those shower moments where I’m shampooing my hair and I close my eyes for a split second and my brain’s like, “Hey! Look at this picture that I just made up!” and they’re often very vague shapes, geometries, sometimes they’re more explicit. It’s just like a constant filter of going in one ear and bouncing around like a pinball machine in my head and then it comes out the other side.

CC: I see that you use a lot of disposable, cheap, and easily available materials. Is that a practical thing or is it more of a conceptual choice that ties into your practice or both?

AAW: I think a lot of the times it’s a matter of what’s around because it makes it easier. Once you start stewing in an idea for long enough then you just melt into the possibilities of what could happen. I think it became a way to streamline and also utilize the things that are a part of my everyday or things that I collected because they resonated with me. Lately I like using China markers, but then you have to peel them. Those have started finding their way into being collaged on paper. I started thinking about using refuse but the refuse is also something that you made. Here at Spudnik I printed “Out of the blue, on the wings of small events,” and I made a bunch of them so that I could use them as a collaging material. 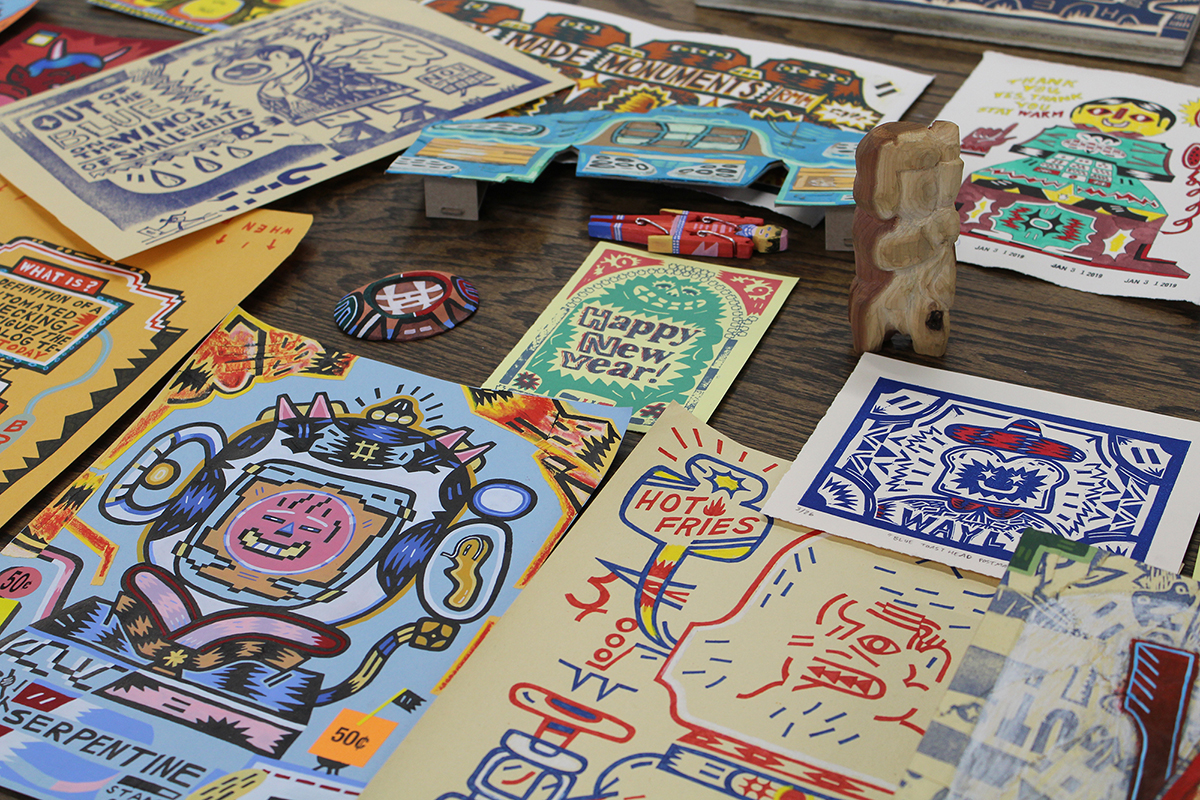 A collection of Atlan’s prints, drawings, paintings, and sculptures

CC: I’m curious about your experience as a Spudnik fellow? How long have you been at Spudnik?

AAW: We’re five months in. I think as a printmaker it’s been a fun thing because leaving school I was really looking for a community in the arts. After four years you leave that place and it’s so important to have other creative individuals in proximity to you to bounce ideas off of or to collaborate with. I think being a part of the fellowship here at Spudnik satisfied all those hankerings. Also the professional development that we do has been helpful, as a young artist not necessarily knowing what I should be doing with the thing I love to do everyday.

CC: Do you have an idea of which direction you want to go?

AAW: I haven’t made any real decisions about what kind of avenue I want to go down. I’m leaning towards proposing shows and working on bodies of work that could potentially be in some kind of space but I’m also interested in collaboration. Tabling at events has been appealing. I’ve been doing an album cover here and there, or event posters. I’ve started volunteering graphic design with Compound Yellow, which is a space in Oak Park that’s artist-run and does cool programming. Art education is something I’m starting to get more into. Here at Spudnik I’ve been helping with the letterpress class on Saturdays and that’s been a really rewarding experience. I’m working with YOUMedia, which is a program through the Chicago Public Library Foundation that’s after-school for tweens and teens. The promise of doing arts education is something that has been looming over my shoulder for a long time because my family is made of educators.

CC: We’ve been talking a lot about art. What do you do when you’re not making art?

AAW: I like to listen to music. I like to make music. I play the drums. I used to play the euphonium, which is a miniature tuba, in elementary and middle school. I have a bunch of various instruments. The collaborative portion of music making really caught my attention but also the act of creating is something that I gravitate towards. I dunno…I like to make things…that’s like, the thing. *laughs* I’ve been trying to get out to nature more. I want to do more sightseeing and investigating the communities of Chicago. That’s another thing, just exploring the community that I’m now back in and reengaging it in a new way. I guess that’s not really a hobby…

CC: Last question: if people want to see more of your work, where should they go?