The virtual event will be presented as a cooking show featuring a variety of guest chefs including Adam Schulte, Certified Cicerone® with Whiner Beer, Patti Swanson with Chicago for Chicagoans and past Hashbrown chefs, pastry chef Dutes Miller and Alex Gilbert of CHIRP Radio. Spudnik Press staff will kick off the evening by sharing beloved cocktail recipes, baking tips, and cheese-making processes. The main dish will be prepared on screen by a guest chef, to be announced when tickets launch.

The Hashbrown Re-Hash: 10 years of Chili Cook-Off Recipes will feature a wide range of chili recipes as well as appetizers, sides, and desserts that pair well with spicy stew. This commemorative cookbook, designed by Andrew Mariscal (Spudnik Press Intern, 2020) includes photos and other highlights from past events. 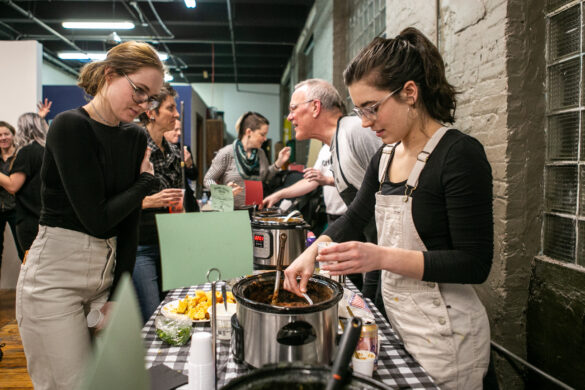 Spudnik Press first presented “The Hashbrown” as a community potluck in December 2009.

Inspired by a cook-off fundraiser presented by the now defunct InCubate (2007-2011), the Hashbrown transitioned to a chili cook off in 2011. In the early years, all chefs represented printmaking studios including student shops like Harold Washington’s “Prinstitute”. The pool of chefs gradually expanded to include community spaces like Comfort Station, arts-related businesses like One Design, and member teams. As the event grew, so did the spectacle with games and music contributing to the festive atmosphere. For example, 2019’s “Heavy Metal County Fair” theme included midway games like face painting with options ranging from youthful rainbows to Alice Cooper-inspired corpsepaint. This Chicago tradition has been equal parts fundraiser and community celebration.

Spudnik Press Cooperative has now gone more than a full year without any onsite group classes. Suspending group education was essential for community health and safety, but has caused a huge loss of revenue. “The Hashbrown Re-Hash” virtual event and commemorative cookbook is an essential community fundraising campaign to support the organization as they transition back to onsite public programs.