Grace Makuch is an artist living and working in Chicago, Illinois. She is interested in the dissemination of language and information amongst fellow millennials. Makuch makes work that is a call and response to being a young person feeling helpless, manic, and confused in the 21st century. Makuch holds a BA from Columbia College Chicago and is an alumna of the Spudnik Press Studio Fellowship Program. She is currently a studio holder at Spudnik Press, where she continues to work in various printmaking techniques.

Lydia James: What was your experience like as part of the Studio Fellowship at Spudnik Press?

Grace Makuch: The experience was awesome for me. I was four months out of school, twiddling my thumbs, thinking: “what am I going to do?” I didn’t have studio access and I knew I loved printmaking, but I didn’t really know how to keep doing it. After school you go from having so many resources to none at all, so I applied for the fellowship at Spudnik Press and I got it! During those seven months, I was able to structure and lay the foundation for the work that I am making now. I didn’t really produce huge concrete things during my fellowship, but it definitely opened up a career path for me.

LJ: You said the Studio Fellowship allowed you to lay the foundation for projects you’re working on now. What does that look like?

GM: So this is a print that I made during my fellowship. 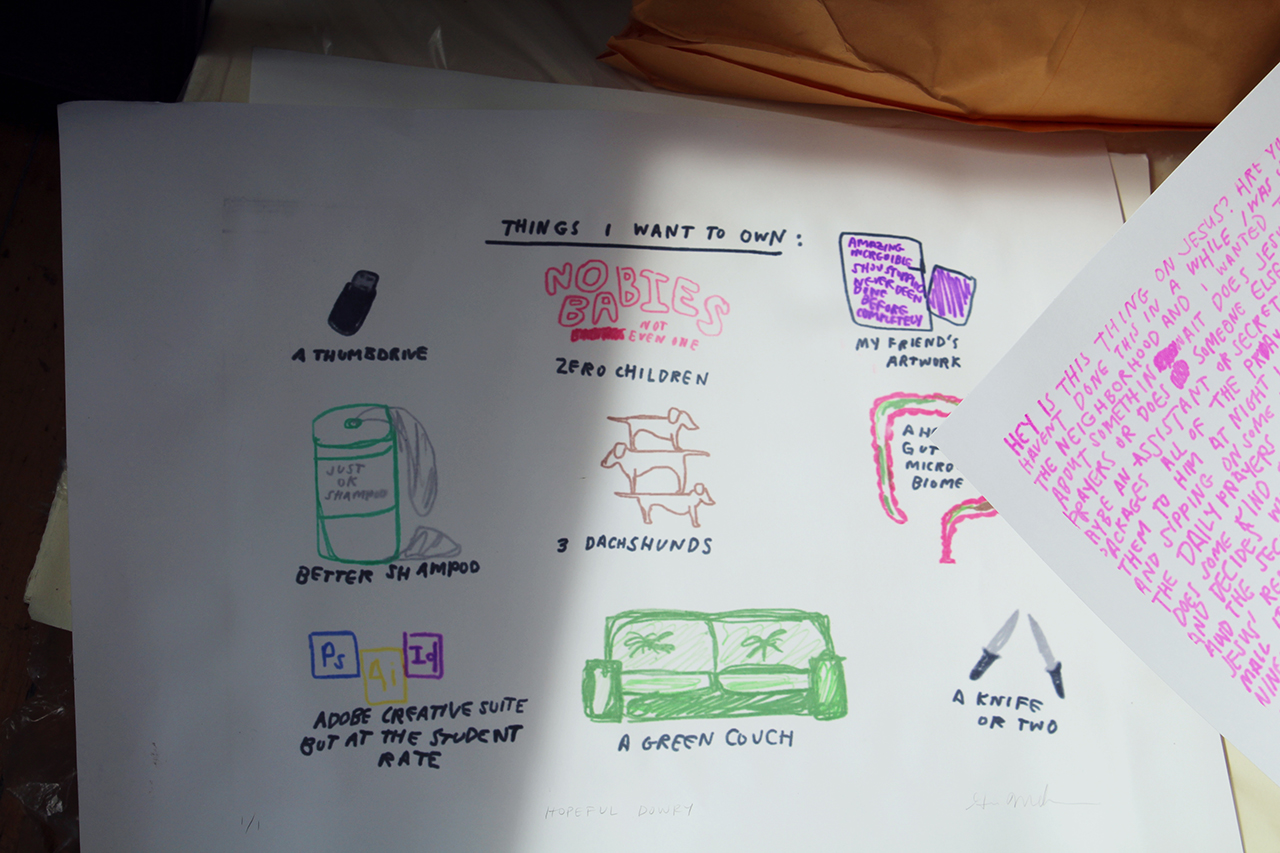 I had been doing the @polenta_girl thing, which is my drawing project and I had been trying to figure out how to move forward from there. It was not serving me anymore, so I started thinking more about writing as a practice, and then I made this print during my fellowship, which perhaps is nothing and everything at the same time? 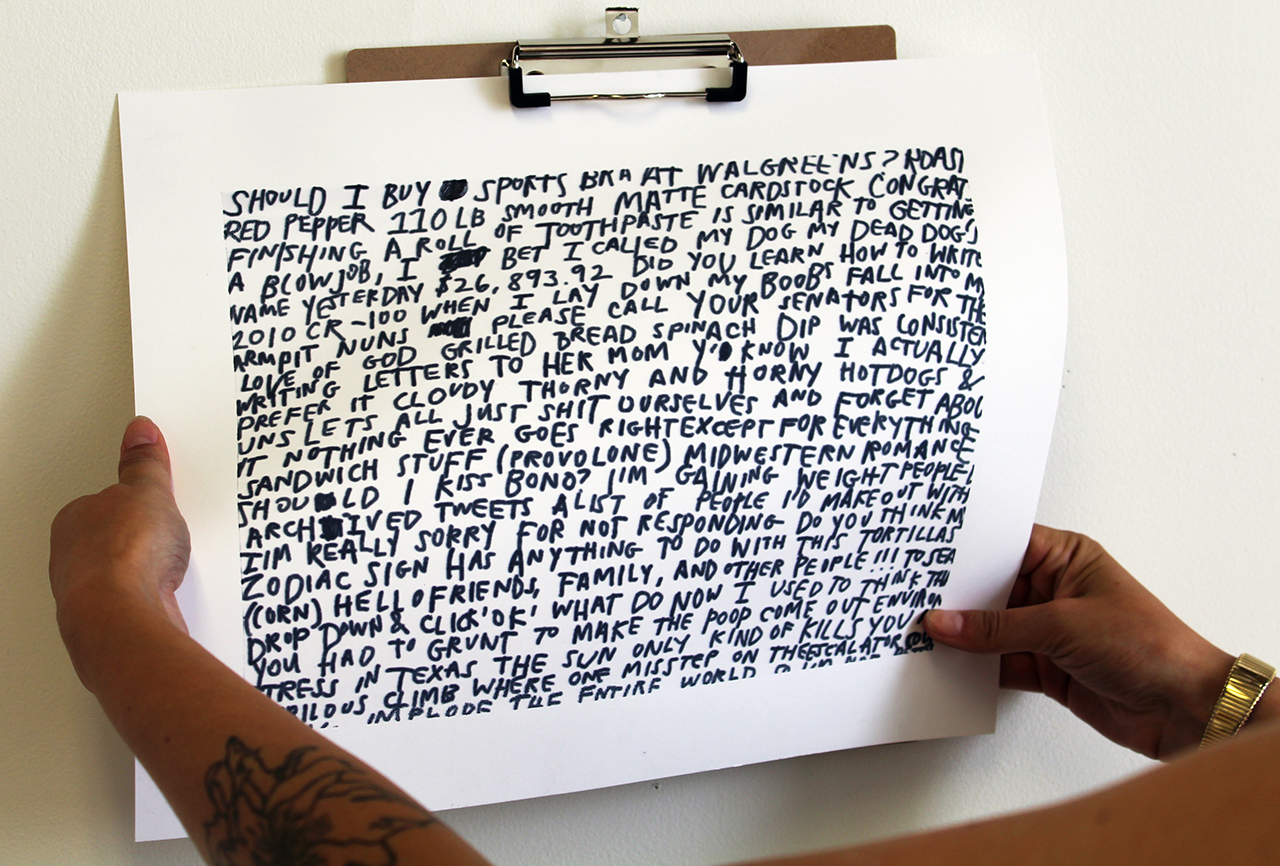 GM: Yeah, for sure. I started making more of these writing pieces, or exercises, and then I created a series of work in response to the thought: “if I could talk to God, what would I say?” First I made the monoprints, and then after my fellowship I made a triptych of paintings called Conversations With God.

LJ: Oh wow! I hadn’t realized those were paintings. 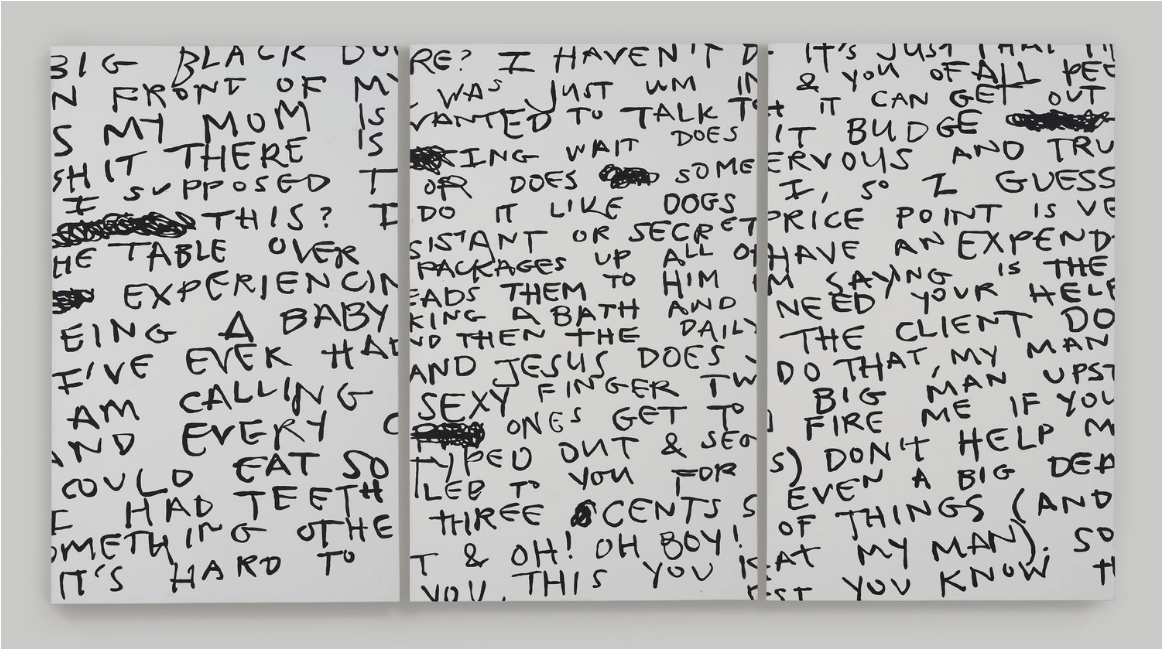 LJ: As a viewer, it’s such a natural response to want to be able to finish the sentence, to figure it out.

GM: Yeah! I’m so glad you said that. That’s a huge part of my practice now. I’m currently making work that revolves around the idea of making one good sentence. If I could just make one ‘good’ sentence, what would it look like? What would the language be like? How would it sound coming out of someone else’s mouth? I think it’s a very millennial urge to want to be brief about something – 140 characters or less.

LJ: You said you’re working on a new etching series. How is that going?

GM: These are the plates for my etchings. They’re in the Twitter font, Helvetica Neue Light, but it’s hand lettering that I’ve done. They read “You took a shower” and “I watched a 20 minute Vine compilation on my phone,” and it’s about feeling sad after you have sex. 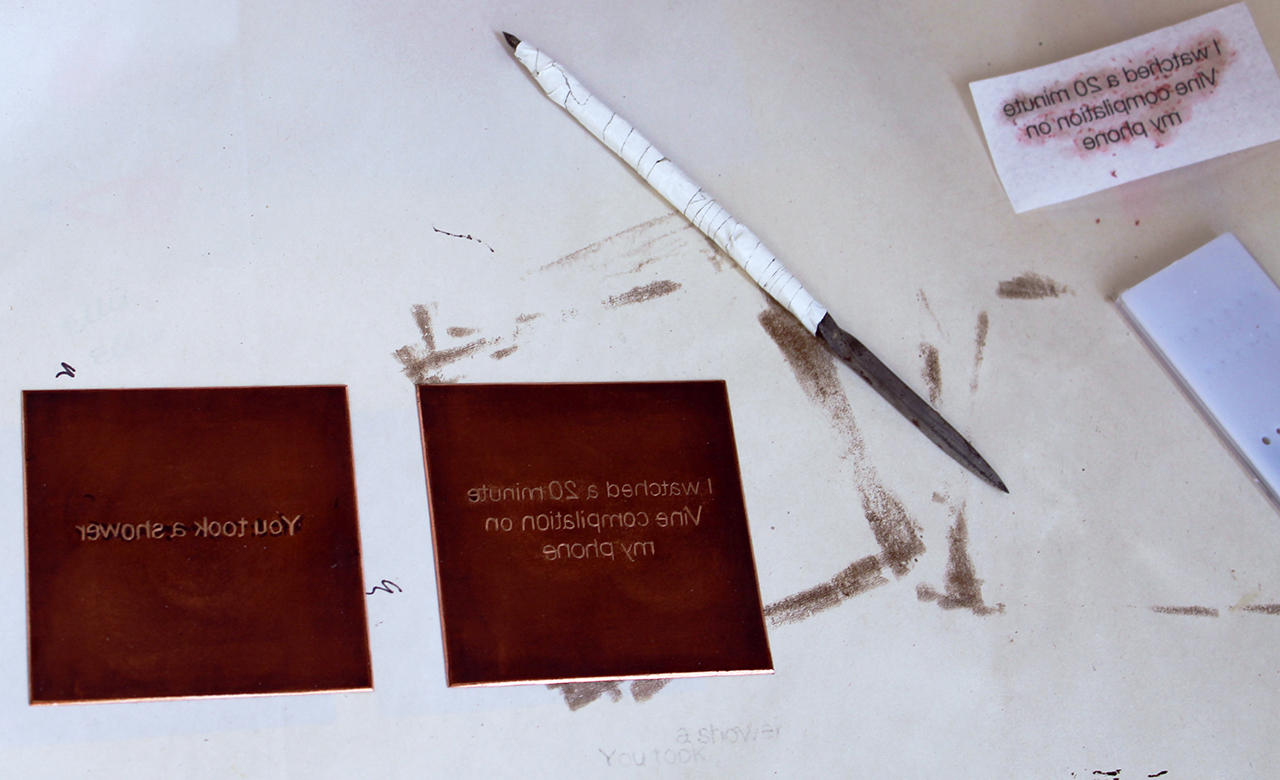 LJ: Why is it important that you replicate the font by hand?

GM: For me, the Twitter font is super important because […] I think of it as my number one source of inspiration. The people who know me best are the people who follow me on Twitter. I’ve had a Twitter account since I was 14 in 2009. I’ve tweeted nearly 25,000 times. I treat it like an encyclopedia of every thought I’ve ever had that I felt was important enough to share. I think a lot about the millennial disposition of knowing that the people who read my twitter might be able to speak more to my daily state of being than my employers, family members, and even certain close friends.

LJ: Beyond Twitter, what are your biggest inspirations or driving forces behind your work?

GM: Right now I’m reading all of Maggie Nelson’s work and she’s blowing my mind constantly. The way she writes and her ability to move from one thought to the next are effortless. People have referred to her writing as genre-bending and I agree. People need to read The Argonauts!

Also, meme culture is a big influence for me. I think people of different generations are really quick to discredit memes as an important and unique form of communication. I think the way that our generation disseminates crucial information and knowledge is really incredible because it’s visual now, and I think about that all the time. We shouldn’t discredit memes.

GM: Thirty or forty years down the line I don’t know if people will still be making memes, but right now it’s this creative burst of: “Let’s only talk to each other in pictures!”

LJ: Let’s talk about Chicago. Are you from Chicago originally?

GM: I’m from a suburb about 30 minutes north called Northbrook. I went to school in Austin and I really missed Chicago the entire time I was there. There are some things about this city that are super unique to it that I just really missed. I think it’s a great place to live especially if you’re into printmaking.

LJ: Yeah, it seems like there’s a lot going on here.

GM: There’s a ton of printmakers everywhere! I went on the Chicago Print Crawl recently and was blown away by the number of printmaking spaces that exist here! I love living in Chicago. I have a small 5 year old dog and we love the city, we’re just two city girls.

LJ: You already touched on this briefly, but I’m pretty interested in the role your identity plays in your work. You mentioned striving for this sort of intense clarity and when I was looking at your drawing projects some of them struck me as very vulnerable. Yet the way that you’re putting your work out there sometimes makes it seem more like a statement. It’s an interesting balance that I also struggle with in my own work—how intimate do I get with this anonymous audience, the Internet?

GM: It’s interesting that you say that because I get super vulnerable on Twitter and then I refine it with my art. When I say Twitter is a big part of my process, it’s huge. I really do use it like a personal encyclopedia.

Touching on the humor as part of my identity, I come from a family that is really goofy and makes fun of each other a lot. There have also been a few really traumatic things that have happened in my life within the past five years. My dad got diagnosed with Parkinson’s when I was in High School and when I turned 19, I ended up becoming his primary caretaker. So, in addition to working two jobs, and trying to be an artist, and going to school, I was taking care of my dad. That’s a huge part of my identity that a lot of people don’t know about and informs a lot of my personality, and who I am, and how I carry myself. I have this blind optimism all the time because—and this is why I think a lot of my work is funny or really vulnerable—I always think you have two options: you’re either going to laugh or you’re going to cry. And for me, I always prefer to laugh. I make a lot of work where I can open up about things to an extent, but leave it after getting to a certain point and then I cover it back up with humor. It’s a really fine line.

LJ: Right, how much do you give, and…

GM: …how much do you keep to yourself […]. Yeah, my dad, has this great phrase that I think everyone should hear. He says: “It’s all going to be okay, how could it not be?” It’s not necessarily good advice [laughs], but it’s that sort of blind optimism thing can really get people through the heavier stuff.

LJ: Right, sometimes you kind of have to lie to yourself a little bit to push through things.

GM: I’m actually working on a new painting right now that’s just going to be the words “faith beyond reason” over and over again. It’s going to start out as a regular font, and then I’m going to make it italicized, and then bold it. I’ll keep adding layer after layer, which represents my total mentality that sometimes you have to do things without asking why.

LJ: How do you juggle all the different mediums you work in?

GM: That’s a great question. I used to be really scared of sculpture, but for the first time this past year I’ve started to make work that’s not 2D and it’s blowing my mind to be honest. I don’t know if I’m just doing it with faith beyond reason.

LJ: Sometimes it just takes being out of a classroom setting to explore other things.

GM: Yeah, there’s so much pressure in school. Honestly, I think a big turning point for me has been this recent piece I made out of children’s letter blocks. 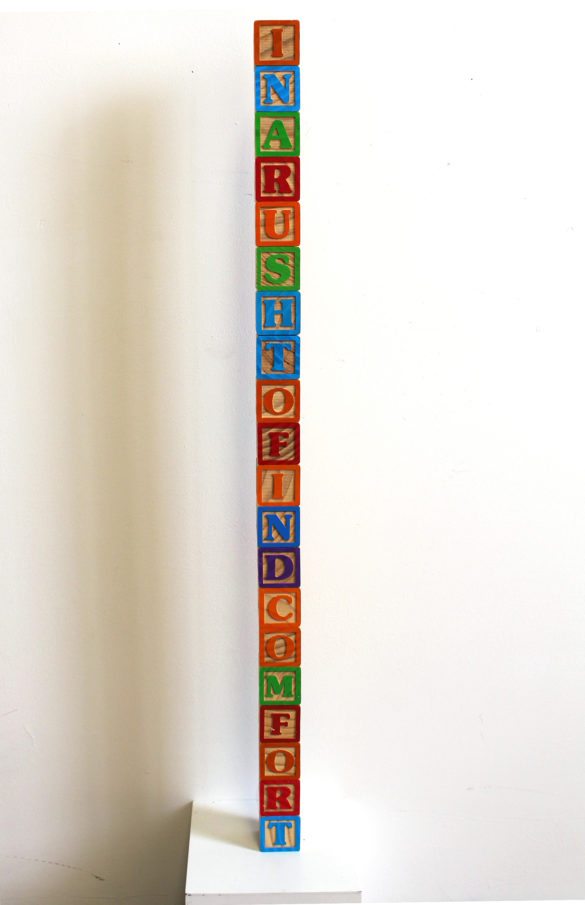 You know how I was talking about this overwhelming urge to make one good statement or sentence? So far I’m just getting fragments, but I think that’s okay. I’ve decided to allow myself to just keep making fragments.

LJ: Maybe it’s not really a fragment because you are the subject of everything you’re writing.

GM: Yeah, I think it’s interesting. It says: “In a rush to find comfort,” but it’s also not easy to read and that kind of goes back to the paintings I made. I want to say something, but then I feel the need to mask it either through humor or confounding it some other way.

LJ: Do you have a favorite memory associated with Spudnik?

GM: There’ve been a lot of good times, but the most memorable I think was during the 10th Birthday Bash when me, Yewon, Jess, and Jazmin (they were part of my fellowship cohort) were competing against Hoofprint Workshop in a screenprinting competition with a mini squeegee and a big screen. We did the worst job ever! It was pitiful and we were all trying pretty hard, too. That was pretty funny.

LJ: Do you have an artist(s) that inspired you to want to become one?

GM: I don’t think there’s a specific artist that inspired me. My parents met in grad school in an MFA writing program. My dad’s a painter and my mom writes and is actually writing plays right now which is so cool – she’s really getting back into it. I grew up around all that energy and my parents did a really great job of taking us to museums. I remember seeing my mom’s favorite painting, Time Transfixed by Rene Magritte, at the Art Institute of Chicago when I was young. I’ll always remember her asking me these wonderful and specific questions about it while we stood there looking at it together. My parents did an amazing job educating me about art and they just really wanted me to be an artist. I know that [my family] will blindly support me no matter what. I say that from a place of incredible privilege and I’m very thankful for that. Also, I’m thankful for my family’s goofiness in general.

LJ: What are your current obsessions?