David Alvarado is an illustrator and cartoonist who grew up in the suburbs of Chicago. A graduate from Columbia College, Chicago, David works primarily with screenprinting and risography to bring his illustrations and comics to life. His comics are characterized by dense illustrations, bright colors, and vast amounts of detail. In addition to making prints, self-publishing zines and comic books, he is also the artist behind “Life is Beautiful,” a comic series that runs on the back pages of Newcity, Chicago.

Manisha: How would you describe your work?

David: When working on a publishing project I usually provide illustrations for editorial articles, cover illustrations, and comics for data reports. The content for my work stems from looking at the density of different environments, such as thick forests, cityscapes with overlapping buildings, and bodegas. I also like to create work with a touch of humor using silly concepts. I make goofy faces and characters because I love the idea of having the creative freedom to make a comic or character that I can place in embarrassing situations. My more serious work tends to be emotional and based on personal stories.

Manisha: How did you get into printmaking?

David: I was introduced to printmaking in high school. I took a block printing class where I worked mostly with woodblocks and linocuts. This really lent itself to my graphic style, which makes use of line art, thick lines, and solid colors.

Manisha: I see that in some of your print work you use heavy borders.

David: Yeah, it just made sense. I like the look of it and I like the crisp lines. So throughout college I continued to take block printing and screenprinting classes. 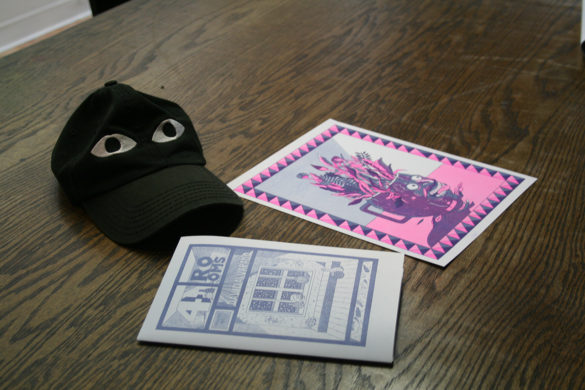 David: About ninety percent of my drawings and sketches are done by hand. But I do some of the sketching and all of the coloring digitally.

Manisha: When did you get involved with risograph printing?

David: I discovered the riso years after Columbia. I remember seeing it online. There was a lot of buzz around it at the time because it was being used to print mini-comics and zines. And then when I met Matt Davis at Spudnik I began to work on projects with him using the risograph. 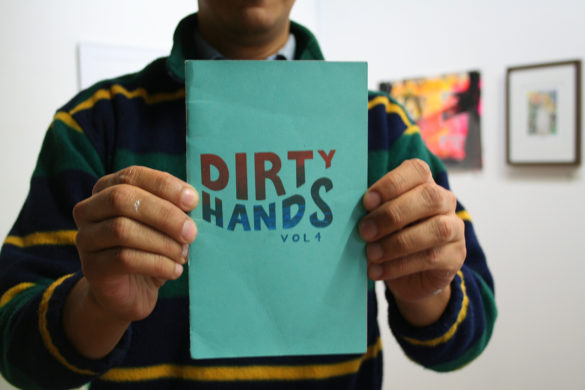 Manisha: Can you tell me more about a recent project that you’ve been working on?

David: I’m working on a mini-comic. It’s going to be roughly 30 pages. Half of the comic was made five years ago when I was still at Columbia. I screenprinted the cover and pages inside. The story was really short, only about 12 to 15 pages.

For the most part, the comic has retained its original look. It is green with blue and purple line art, and the story picks up where I last left off. Except this time, I decided to print it with the risograph because I didn’t want to do all that large-scale screenprinting again. The prints are slightly off-register but that is intentional. 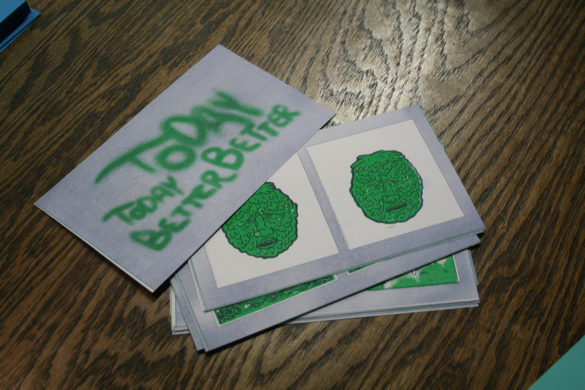 Manisha: What do you do when you’re not making art?

David: I have a full time job. I like thrifting and I run when I can.

Manisha: So what would be your top three thrift store recommendations?

David: The best one, in my opinion, is in the suburbs because everyone donates to this one spot. It’s a huge Salvation Army in Niles. That’s the one to go to. Then there is Family Thrift in Logan Square, which is pretty big. It has two floors and I’ve found some good stuff there, too. And then there is Village Discount on Montrose.

Manisha: Do you focus on something in particular when you are on a thrifting adventure?

David: I mostly look for clothing, weird art and books. I got a faded purple crew neck sweater recently. It’s so big and comfortable.

Manisha: What would be your dream project?

David: My dream project would be to work on a large illustrated accordion book. I was very inspired by Micah Lidberg‘s Rise and Fall. It’s a beautiful book about dinosaurs and was done entirely using the offset press.

Manisha: So does that make Lidberg your dream collaborator?

David: No, that’s just my dream project. I would love to work with Sammy Harkham. He is a cartoonist who does dense illustrations. I think his comics make really good use of space.

Manisha: Let’s end with a fun question. What is your favorite flavor of ice cream?

David: Peanut butter and chocolate. I always get that. You know, I feel bad for all those kids who have peanut allergies. It’s like a whole generation of them.

If you want to find out more about David and his work, visit his website or follow tuffasaurus on Instagram. He will also be an exhibitor at Comic Arts LA  later this month.