Jenna Blazevich is a Chicago-based product & branding designer, calligraphy instructor, and feminist artist. She also owns a company called Vichcraft that creates and sells a variety of calligraphy and print-based work.

So just to get started, where are you from?

I’m from here. My parents are from the south side of Chicago.

Has living in Chicago impacted your art practice?

Definitely. I think it affects the way that I’m able to make art, and the way that I’m able to access certain things and learn from certain people and teach people. I make it a point to share the craft that I’m interested in and it affects the subjects that I’m creating as well. Being in a really big and in some ways problematic city, it is inspiring even though sometimes [the inspiration] is coming from a place of frustration and confusion. I don’t think that would be the case if I were from somewhere else, so I’d say in a lot of ways it does impact my art.

Do you consider Chicago to be your city?

It’s the city that I’ve felt is the most aligned with my internal pace. I’ve lived a few places where I felt like I was operating on a different wavelength than my surroundings, which is frustrating and leaves you without an ability to find your place. I think Chicago is that sweet spot in between a smaller city that’s a little less progressive and something like New York where it’s really hard to find your place. It’s been the best option for me of any city I’ve lived in, and as a pace to start my business. The cost of living isn’t insane and I have communicated with people who I can work with and be inspired by, but I’m not a “Chicago for life!” person. It’s a fine way to be but I know that other cities are great and I’m very biased. But that’s being a human. 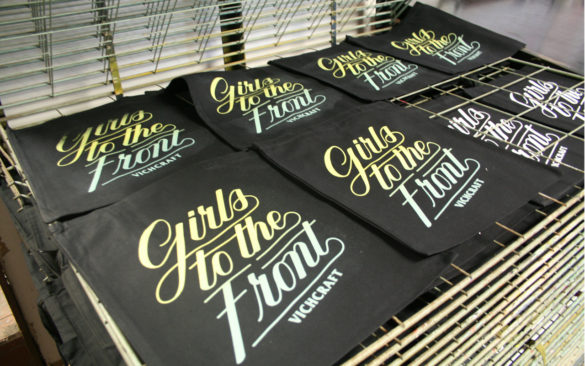 I was very big into gig posters in high school. I wanted to learn to screenprint until I learned that while it is not necessarily labor intensive, it requires a lot of specific tools and spaces. The first time I went to Pitchfork Music Fest when I was around fifteen was when I first found out about people making gig poster art as a specialty. I bought my first print there. From then on I was obsessed with googling and researching all about them. It wasn’t until maybe four years later that I actually learned how to [print]. The first design job that I had where I learned how to screenprint was at a gig poster shop in between my first and second year in college.

What are some of your current influences? (Cultural, personal, etc.)

Instagram seems to be the consistent source of inspiration and information. I use instagram a lot to follow certain accounts that I think keep white feminists on their toes. This is something that I really try to be mindful of, and not fall into. It’s a common and easy thing, in some ways, to make things all about you and the way that you experience the world. I also go to a feminist book club every month that aims to highlight intersectional feminist voices, which is really great because every month I get to have at least one major discussion with a lot of different female-identifying people that are bringing their own perspective on topics which generally aren’t highlighted in traditional literature classes. There’s a lot of room to fill those holes. 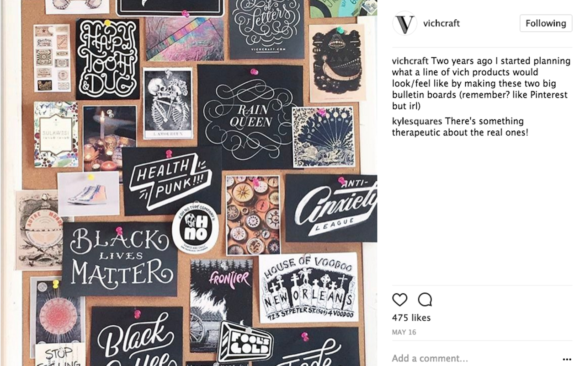 In your member profile you are noted as being a feminist artist. Why is that important to you?

Well, [being a feminist artist] is super important to me because it’s something that I feel was one of the first activist things that I was able to really connect with and create from. It affects my and so many people’s lives in so many different ways. I wish that I would have known about feminism earlier on because maybe it would have affected the jobs that I’ve taken on or the things that I’ve done. Once I did find a groove where I could understand things from a personal perspective and let myself take off in that direction it really started to affect me personally in the way that I view the world. The way that I create work, and Vichcraft, has always been very tied to me personally because it’s only me. It’s been important for a long time and it’s been a part of Vichcraft since the inception of it. The reason that I wanted to start my own thing is tied in to sexism in graphic design as an industry. Obviously, once Trump won, I feel like there was a shift from creating this work for more personal and introspective reasons to sort of deciding if [Vichcraft] wants to be a feminist product store. 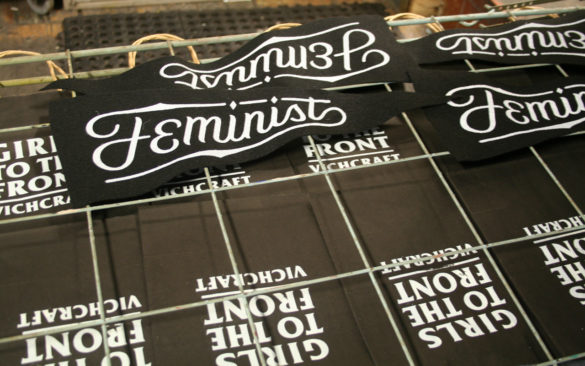 On a lighter note, what’s your favorite type of dog?

I’m really bad about remembering the names of different kinds of dogs, but my parents have a Vizsla. She’s really pretty and I love her. She’s the perfect size and very playful. Her name’s Seneca. I don’t have a dog of my own but I like to hang out with her when I’m home at my parent’s house.

What do you think dogs do when their humans aren’t home?

Well, she sleeps a lot when my parents aren’t there. She’s grown to love sleeping because she’s an empty nester dog. They got her after all my sisters and I all moved out, which is a bummer. Sometimes I bring her to the city and she just loves to smell all the different things and smell all the different dogs. But she does a lot of sleeping.

If you want to find out more about Jenna, or see more of her work check her out on social media: Instagram, or on her website.