Sean Mac is a Chicago-based illustrator, cartoonist, and muralist. He uses comic books and zines as a platform for storytelling and narrative. His work uses loose linework and vibrant colors to tell humorous and intimate stories within each panel. In addition to self-publishing his comics his work includes screenprinting and public art. He graduated with a BFA in Illustration from Columbia College Chicago.

Sean Mac was interviewed by Andrew Mariscal as part of his Spring 2020 Internship at Spudnik Press Cooperative. Andrew is a printmaker and graphic designer pursuing his BA at Dominican University.

Andrew Mariscal (AM):What pushed you to the comic format?

Sean Mac (SM): Video games and geek culture got the ball rolling. Being a kid with a Nintendo 64 growing up, I played a bunch of Super Mario. That and Saturday morning cartoons were huge–you know, “Cartoon Network junkie”.

I would draw all the time. In middle school, I would make fan comics for the cartoon Teen Titans, but never considered it as a career path until I went to Columbia College and met teachers like Ivan Brunetti andChris Eliopoulos. They helped me realize that I could make a career in comics.

Another influence was Chicago cartoonist Jeremy Onsmith . He introduced me to the independent comic artist “Zine World”. I started by helping out at CAKE, an alternative comic festival. The first year I was just setting up tables, but I learned that a lot of the people selling there had a similar story to mine. It was just a community of artists making their own stuff and tabling it. I realized that I could do that too! 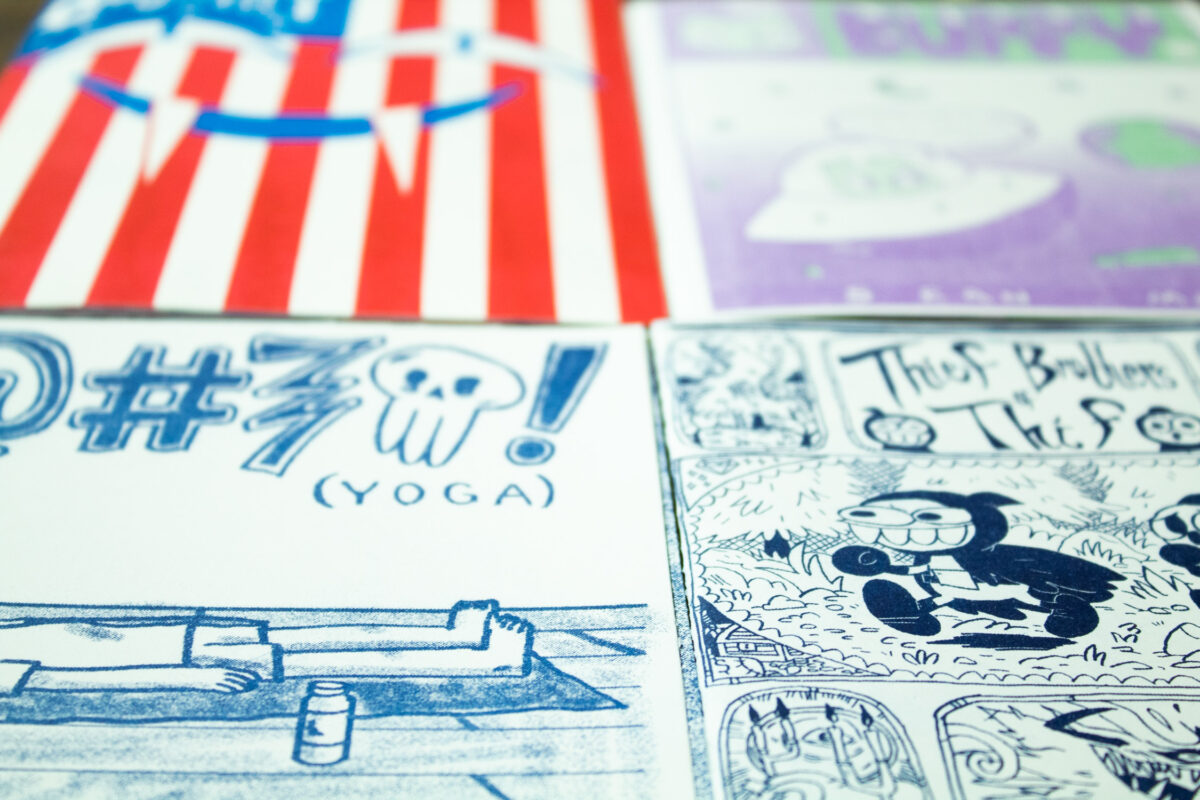 AM: What is your process when making a comic?

SM: My process can be all over the place. My comic Thief Brothers of Thif started off on a whim. I drew one page in my bed, not really planning on a story.  Eventually, I got into the habit of adding a page to it nightly, but that made for a chaotic way of creating a comic.

Others start differently, where I develop a storyline and try to follow it.Still,a lot of my work starts off as a random idea in my head. For example, my character Buppy started off as a pen drawing on a receipt and has since evolved into a series. That happens a lot.I’ll draw a little character or comic page and think, “this might make a cool story”.

Lately, I’ve been trying to start my comics with a clear idea of how they will end. This is especially important when working on large format comics, as finding a conclusion that doesn’t feel tooabrupt is always a challenge for me. 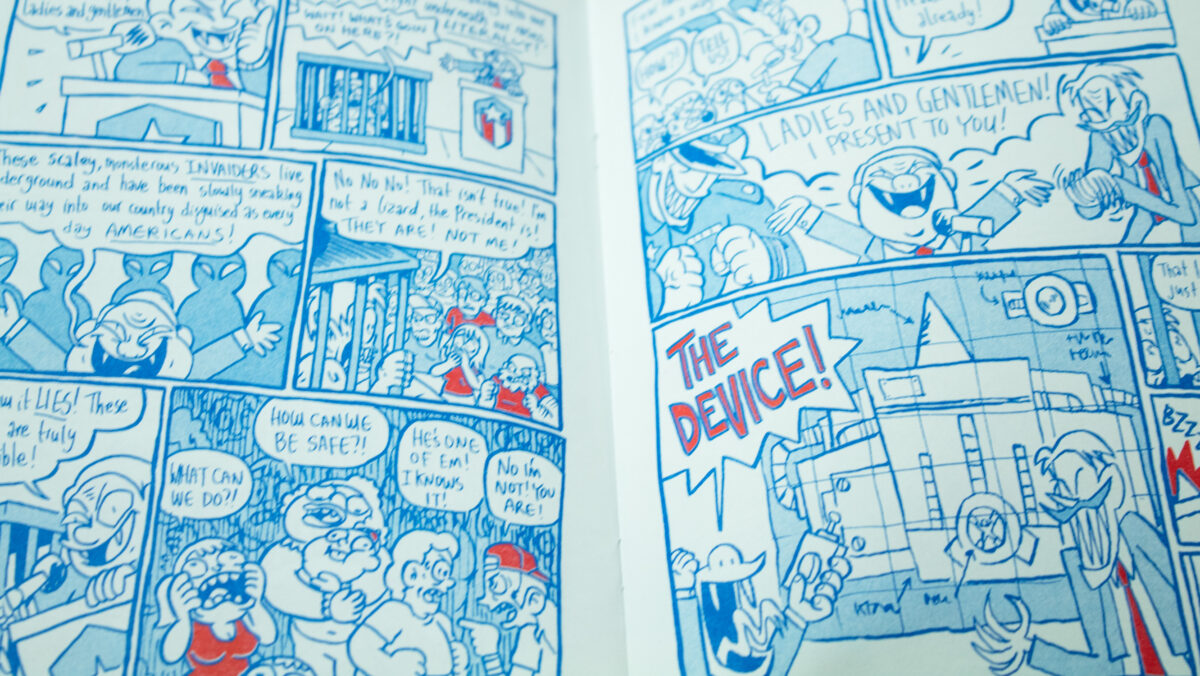 AM: Is there a particular reaction you want from your work?

SM: There are all sorts of reactions I’m going for. I create comics to work through ideas, make people laugh, smile or just have fun.

AM: Do you ever feel stuck when producing stories?

SM: I try not to believe in writer’s block. Sometimes it’s going to just suck for a bit. There are times where I try to chug through a story to see what happens. Other times I’ll feel like I lose motivation and need a break from drawing or anything artistic. Usually, sitting down and getting started is the hardest part because I may have no idea where the story is going. But after working at it for a few minutes I’ll start to feel like I can manage.

AM: How has risography been implemented into your work?

SM: Getting into risography has changed things for me. In the past, I’ve made comic books using companies like Overnight PrintsandI would get a comic book back that was super glossy or twice the size I originally intended. Through risography,I’m a part of the printing process and have full control over the final product. 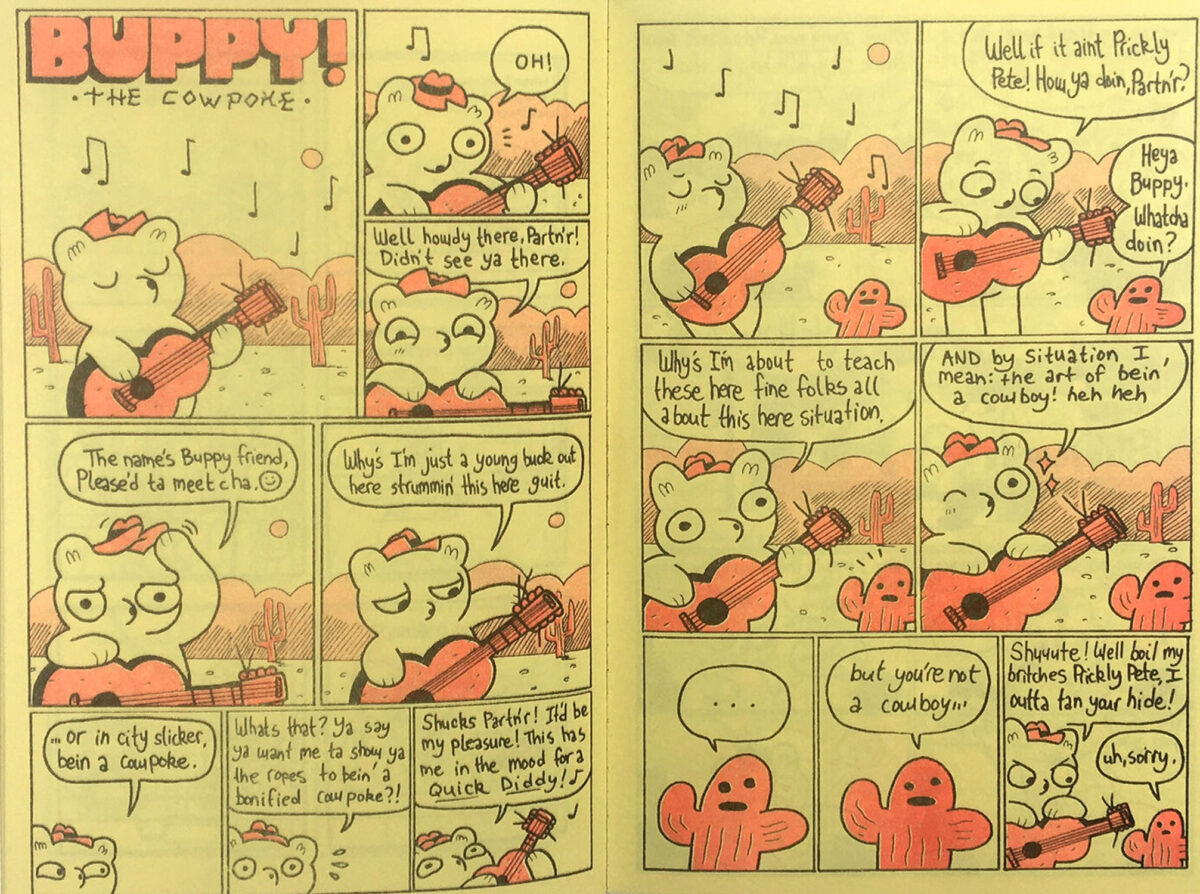 AM: What role has animation played in your comic development?

SM: My animation work has developed through my interest in comics. Like with comics, I started off just having fun and making random gifs, but recently, I’ve been working on a storyboard for a project I want to pitch. This process has changed the way I format comics. I wanted to avoid a position where I would be drawing with no end in sight while facing a deadline. SoI outlined the project and listed important jokes and story points. After I finished, I realized how helpful writing and storyboards can be for developing my approach to animation and comics.

AM: What do you do in your free time? How does that influence your art?

SM: Well, lately I haven’t had much free time, but my daily life does find its way into my stories.

The Buppy comic that I am currently working on presents him as a business man working in an office. While I don’t have a job that is anything like that, I have been in a more administrative position recently and that experience is reflected in the comic. I have also made many short Instagram comics with jokes based on past life events. Other than that, my free time is spent goofing off with friends and drawing.

AM: Tell me about your mural work.

SM: I did one mural at the Co-Prosperity Sphere, and one at Columbia a while back. But lately, my mural work comes from my position as a teaching artist with the company Green Star Movement. They do mosaic murals all around Chicago. This work has shaped the way I look at more “serious drawing” since a lot of their murals are of important figures of the community or of monuments. Drawing mural designs for the Green Star Movement required a more realistic style. At first, this felt completely outside my wheelhouse since I typically produce more cartoonyimagery, but the experience taught me a lot and was a very helpful exercise.

SM: There are so many artists I look at. What I’ve been blown away by lately are Claymation artists on YouTube. For example, Lee Hardcastle does great work that captures a darker theme. I find the visual result of Claymation feels more “real” than a traditional animation. The style takes a lot of effort and the work individuals put into a finalized animation always blows me away.

SM:  There have been a mix of effects due to the stay at home order. Some great, some bad.

First, the bad; I was planning on getting my master’s degree in the fall at either Savannah College of Art and Design (SCAD) or the University of California, Los Angeles (UCLA). SCAD is planning to have on campus classes, but that can change at any point. UCLA has yet to tell me if I’ve gotten into their art program and contacting someone for a response has been difficult. Overall, the fall semester is filled with uncertainty, which is frustrating to say the least.

Some great news is I’ve had a ton of time to work on my own art. I was able to finish a “Pitch Bible” (format to pitch an animation) that I poured a ton of time into. This project wouldn’t have been possible without all the extra free time. I submitted this Pitch Bible to a cartoon studio and will be having a video conference with them at the end of the month. I’m excited to see how this project will progress! 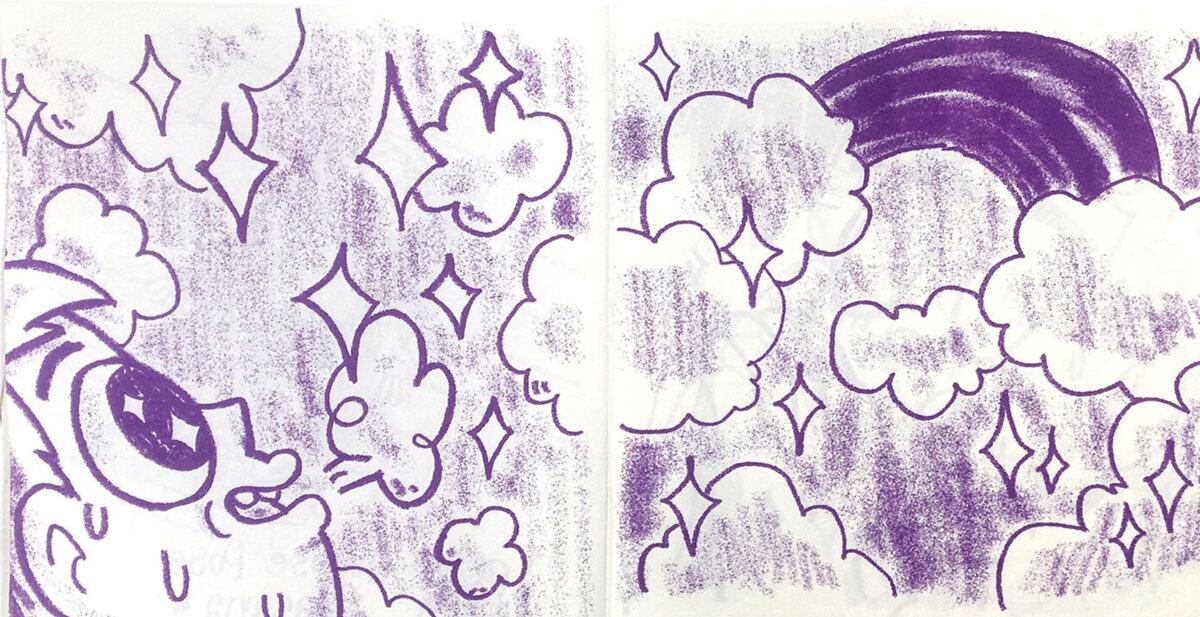