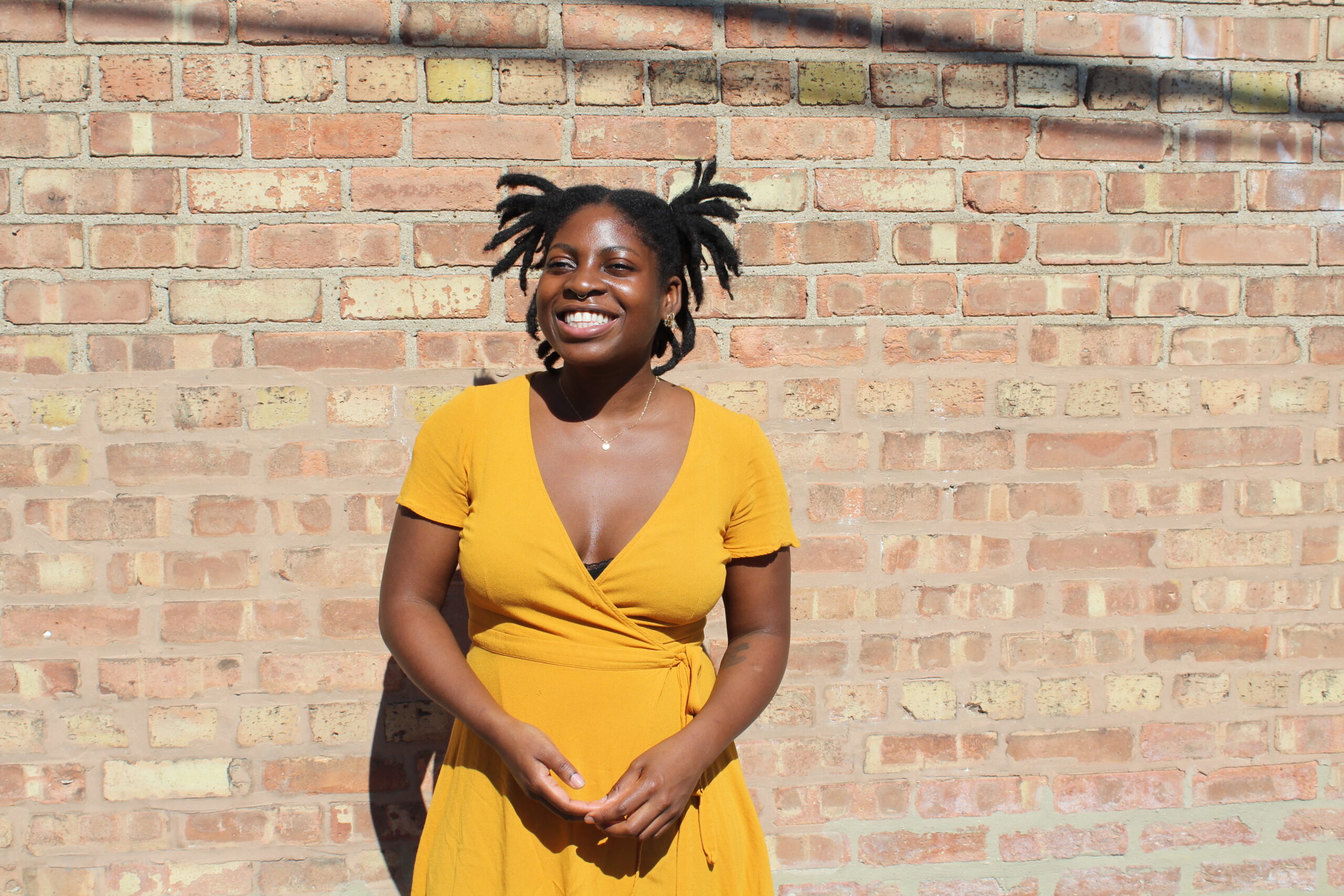 Osée Obaonrin is a multidisciplinary artist who has worked in poetry, fibers, and most recently print. Originally from the Republic of Benin, she grew up in the DC area and currently resides in Chicago. Obaonrin focuses on the documentation of grief, mourning, and the self. She attempts to reconcile with the losses that have opened her to grief, the pain that has come along with it, and perhaps find hope as a means of resistance. She was also a 2020/21 Spudnik Press Fellow, where she focused on screenprinting.

Obaonrin was interviewed by Mariah Joyce as part of her summer 2021 internship with Spudnik Press Cooperative. Mariah is a multidisciplinary artist, writer, and current MFA student in Printmedia at the School of the Art Institute of Chicago. Mariah has a background in journalism and philosophy, and her artistic work is a tool through which she processes personal questions of meaning, identity, and interpersonal connection.

Mariah Joyce (MJ): You were a guest a few months ago on “Inside the Edition,” the Chicago Printers Guild podcast, and talked about coming to print relatively recently. I’m curious how that happened. Has working in print changed how you express yourself at all, or is there anything that you’ve discovered about what you can say in that medium that you had to say differently in another one?

Osée Obaonrin (OO): I used to write more than anything else. That’s kind of the conversation I have now: I don’t really write anymore, but I still want to call myself a writer, still want to be attached to this idea of being a poet, and I think that’s my first love. When you define poetry, it’s very much trying to express yourself with as few words as possible. But oftentimes it doesn’t feel like it’s very literal even if the words are very literal because there’s kind of a gap. When we remove the traditional rules of structure and grammar, we relate to the words in a different way, the meanings feel abstracted, because we’re not used to pure minimalism as a form of clarity.

And since I’ve started making prints, I’ve never printed anything very figuratively. It’s still very abstract, and it’s still about creating that essence of the feeling through imagery, and so I think in that way it relates. But print gives me the physicality that writing gave me because I loved doing it by hand, but not in a full body sense, and that’s why I’ve enjoyed print. I also think there’s a nice visual quality to having a stencil on a screen or a burned screen and having that transfer, and it’s really quite satisfying to see ink on paper. 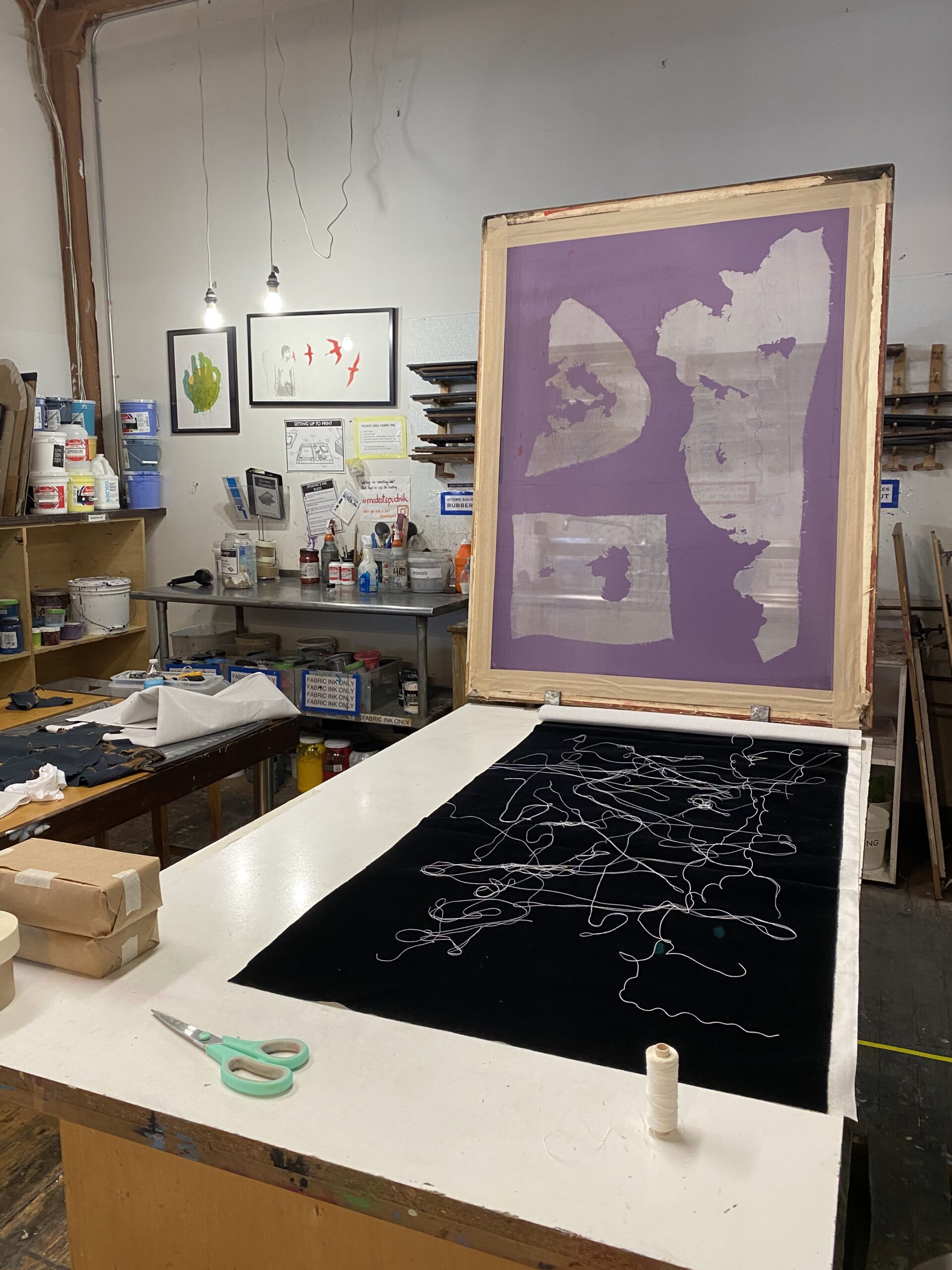 MJ: I feel the same way. Especially when it’s not a one-to-one where you’re painting with ink. It’s a transfer so it feels more like a process of discovery. Then you figure out what you just did.

I noticed there is still language incorporated in some of your prints and visual art. Do you find yourself gravitating towards images and words to express different ideas, or do you think they’re different ways of expressing the same idea?

OO: That’s actually an excellent question. Am I really saying the same thing over and over again, or am I trying to figure out different things? And I think, both? I’m trying to figure out the same thing, which is me. But there’s different aspects of me, and there’s different ways in which I’ve grown to exist, on my own but also through interacting with other people, so I have different questions about that. But at the end of the day, the core is just who I am and the question of exploring these different relationships.

MJ: And that process of self-discovery, did that start with the language and over time move into the visual stuff, or are they separate, doing different things?

OO: They’re not separate, they’re not doing different things. I think it did start with language. I was drawing and doodling all through childhood, but one of the first ways I understood myself and self-expression was through writing. Like this is very much my home. And then I was able to, through print work and also just visual work after that, shape what it is that I’m really trying to say about myself. It’s a little weird thinking about it now. Like maybe print is a little less freely expressive. There’s a lot of editing in the way that it works, and I try to remove as much editing as possible in the way that I print, but at the same time there is still planning that is involved in the process. That’s a new concept I’m kind of figuring out.

MJ: I think that makes a lot of sense. In writing, especially in poetry as I understand it, there’s actually so much editing work in the background that you just never see, and so it’s interesting to think about printmaking as also a process of editing. It’s an interesting connection.

OO: And I think printmaking starts with the editing. With writing you could write all the words that you want and then afterwards you have to go in and reduce or add or expand, whereas with print work you’re editing through the whole process. You do have to edit out and choose a thing and go from there, and I think maybe in poetry and the written word your brain is doing that automatically. 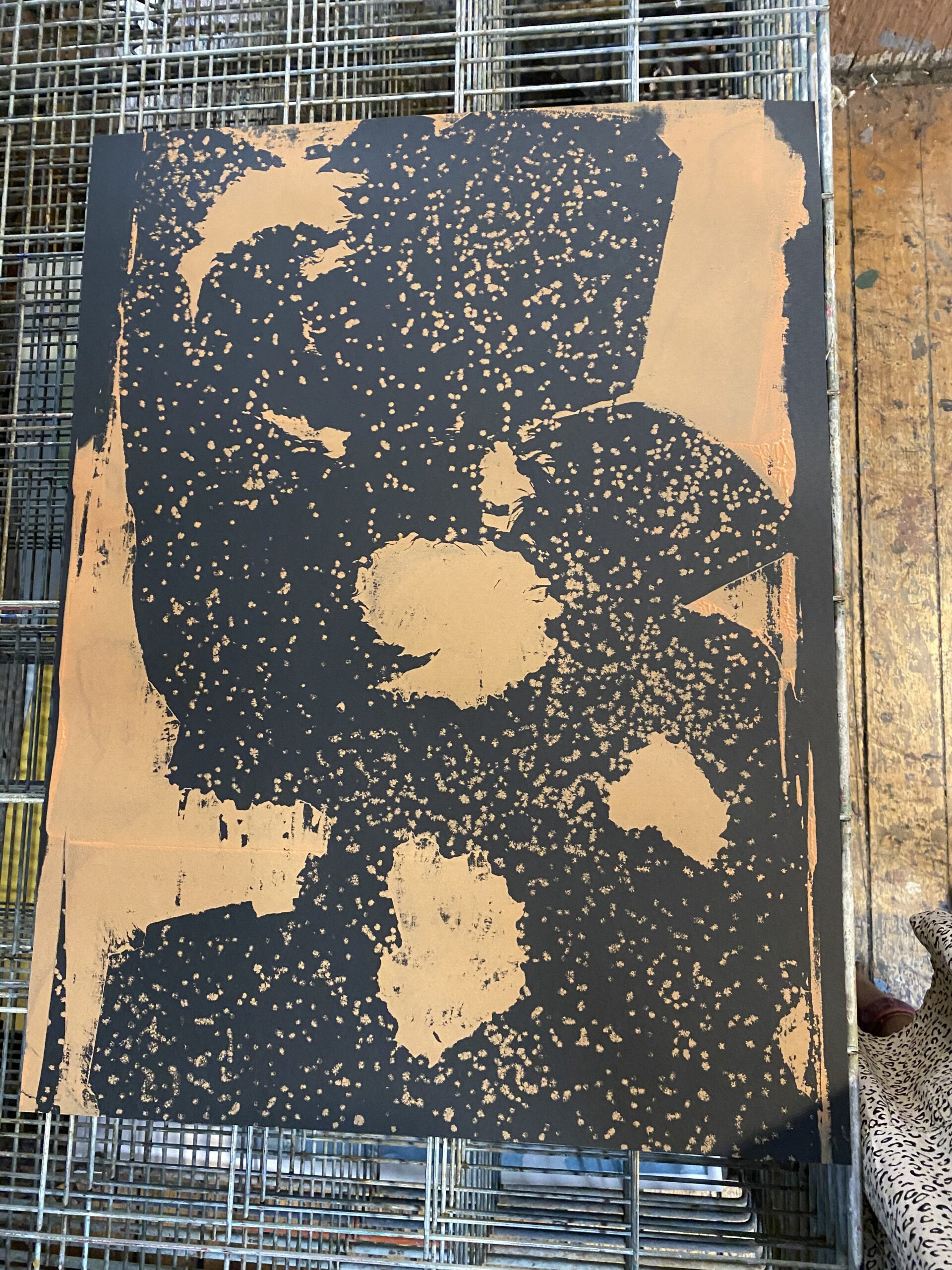 MJ: And it’s interesting to also think about how pure medium, time, and material constraints go into that, because I think you’re right – if you were writing, obviously there’s still effort, but the amount that you lose by just spitballing a bunch of ideas versus burning every screen that you came up with an idea about is just so different.

OO: Yeah, and so then in a way printmaking can also be more frustrating too, like, I failed and I wasted all the paper, and the inks, and the time.

MJ: In your artist statement, you talk about your work as a means of understanding yourself, and processing grief and loss. Do you think that it helps you understand those experiences or make peace with them, or is it not really about trying to do that, is it about maybe sitting with it?

OO: Yeah – I think there’s so much that you can never understand or finish. Like I think grief is something that never ends, so I think it’s a process of letting it happen, letting the feeling be felt and sitting in it, like you said. 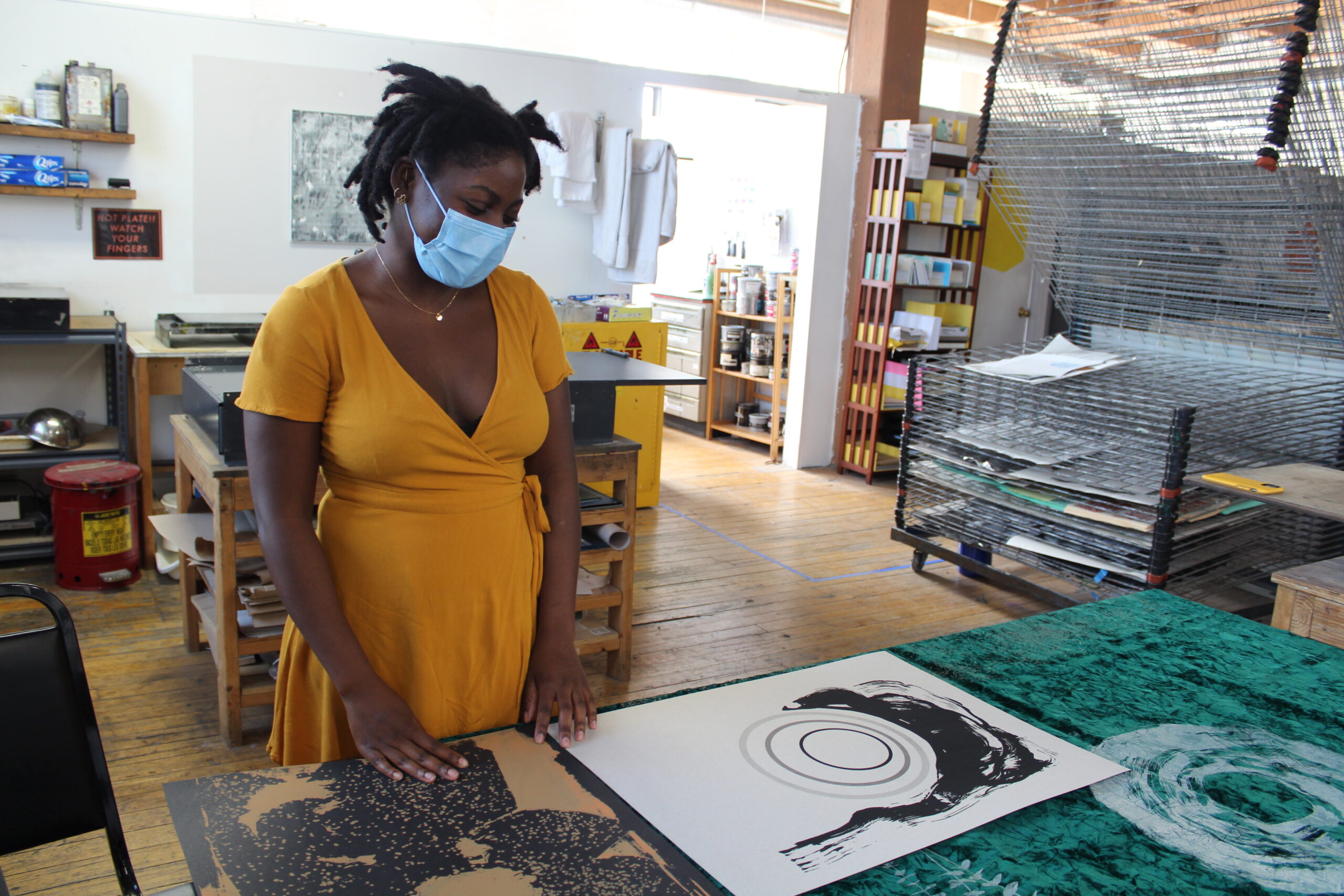 MJ: Does that come to you naturally?

OO: It doesn’t sit with me naturally. I think that’s why art and writing and all of those are a safe haven for me, or have felt like it many a time.

MJ: That resonates with me. It’s probably not true for everybody, but I feel like it’s true for a lot of people who do creative things. I also noticed that you talked about how the more honest you are in your work, the more relatable it is to people. I’m curious, what about that relatability feels important to you?

OO: No one wants to feel like they’re alone ever – ever, period. We’re all trying to conform to be accepted, but also we’re all just learning social practices and cues, just like social norms. But also stepping into ourselves, and sometimes ourselves fit outside of that, so you have to navigate that space. I think that we all don’t want to feel alone. We want to feel like someone else is feeling what we’re going through because being alone on an island is not fun. And it also doesn’t make sense. If we’re all here and we’re all human and there are millions and millions of us, how does it make sense that I’m the only one feeling this way?

MJ: Are there any writers or artists that you remember giving you that feeling of, “oh, I’m not alone. This person is somehow vocalizing what I’m feeling?”

OO: When I was really young, as in elementary school, I remember Phyllis Wheatley always sticking out to me. She was a Black child who was enslaved and sold to a family who ‘experimented’ with the idea of teaching a Black child to read and write. Phyllis’s story always fascinated me, the first Black American poet with a published book of poetry. And honestly I can’t really tell you any of her poems at this point in my life. But I think it’s being able to see yourself, too. And I think I was really lucky in the sense that I was taught by a Black woman, I believe Mrs. Hudson, in elementary school. It was a Black woman teaching me about poetry and Black poets. At the same time I remember very vividly learning about Langston Hughes, and so I think it made sense to me that someone who was successful for the work that they did looked like me. And they were successful despite all of the things that said that they couldn’t be or wouldn’t be.

MJ: What do you think makes someone an artist?

OO: I think everyone is anything they want to be. I know a lot of people wouldn’t agree with me, but if you do something creatively at any point and you enjoy it, why not? You’re an artist, you produced something! All we’re doing is producing things. For some of us it gives us emotional satisfaction and release, for some people it’s financially how they want to exist in the world, and for some people it’s just a hobby. But if you’re doing something creative, why is there a barrier to say someone is an artist and someone isn’t?

MJ: Speaking of producing, what projects have you been working on recently?

OO: I’ve been burning fabric for a new piece. I’m trying to see if I want burned fabric, or if I want to burn the fabric and print its silhouette. 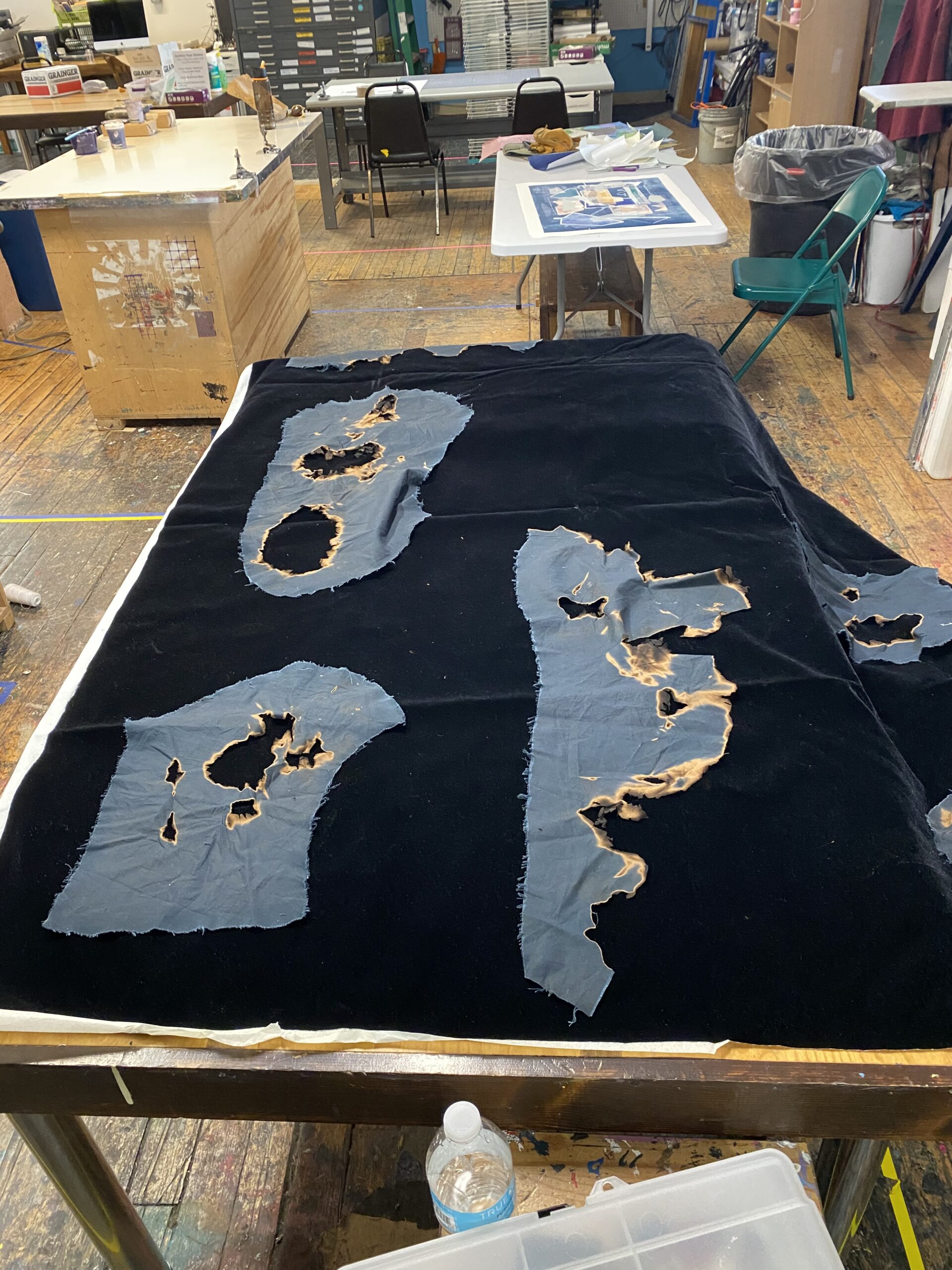 MJ: What is it that is calling to you about the burnt fabric?

OO: It’s hard to say, I think it’s very intuitive. One, I love fire, fire’s a very interesting object to look at. Also the fact that it exists and how we discovered it as humans, I think that’s really exciting. But I’m really looking at gaps more than anything else, because fire creates holes in objects. I think that’s probably the biggest thing: gaps between things and the idea of removal. A lot of my work has to do with my friendships and relationships, and there’s a parallel with this idea of removal and gaps and burning away. As we get older relationships change and shift, and I’m really thinking about that.

MJ: Yeah, it sounds like the space that absence makes, a little bit?

MJ: Are you making that piece for a particular show?

OO: Right now, I have the Chicago Artist Coalition HATCH Residency, so we have our ­­­survey group show coming in August–coming soon-

OO: -a little too soon, yeah, that’s how it feels. I’m making a new piece for that, and so I’m trying to figure out exactly what that piece is going to look like.

MJ: Where else can we find you?

OO: You can see my work at the upcoming HATCH survey group show, I Sense Something Has Changed, which opens August 13 (opening reception 5-8 p.m.). I’m also excited to share that after promising to make an online print shop for about the last year, in August I’ll be having a print sale on my website! And you can find me on Instagram at @owe.sea.